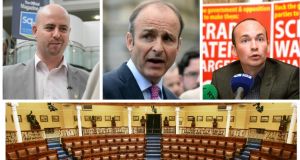 The outcomes of the two Dáil byelections are bad news for Fianna Fáil and Sinn Féin who were favourites to win throughout the campaigns. Cathal King (left) of Sinn Féin was expected to win in Dublin South West but was overcome Paul Murphy (right). A defeat for Fianna Fáil in Roscommon South-Leitrim raises further questions about Micheál Martin (centre). Photographs: The Irish Times. 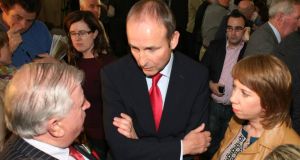 Since the first count was announced in Roscommon South West early this afternoon we knew how it was all going to pan out and the jolt that was in store for Fianna Fáil.

Sure, Ivan Connaughton was 1,114 votes ahead of his nearest rival - the Independent candidate Michael Fitzmaurice.

With 20,00 votes or so shared between the other eight candidates, that gap was always bridgeable.

As the counts progressed slowly, Connaughton was like a breakaway rider in the Tour de France, tiring towards the latter end of the stage, being slowly and unremittingly hauled in by the voracious peleton.

As in Dublin South West, we have a second surprise result. Connaughton was the odds-on-favourite but Fianna Fáil is simply not strong enough any more to win votes according to its own lights, or as a party that is seen as providing a real alternative vision to the Government.

It’s overstating it a bit - but only slightly - to say the Roscommon-South Leitrim byelection was as coveted by Fianna Fáil as ‘Precious’ was by Gollum in Lord of the Rings.

For a number of reasons, this poll has in recent months assumed a huge significance for the party. In front of it is a Government which will benefit increasingly from a recovering economy. Behind it, Fianna Fáil can hear the perfectly regimented boots of the onward march of Sinn Féin. In between, there is continuing volatility and anger - and as this result will show a lot of it is manifesting itself in votes cast for ‘none of the above’ - for independent candidates.

“We have been all voting backwards for the last few years,” a shopkeeper told me in Roscommon town earlier. “You can’t seem to trust the old crowd any more.”

Fianna Fáil has been in a holding pattern for a good while now. Sure, it did well in the local elections but but they are contests that have their own peculiar quirks and factors and can’t be directly correlated to national politics. Bertie Ahern did poorly in local elections in his time, 2004 in particular, which made not a bit of difference when it came to general elections.

Likewise here. The party had a good local election in Roscommon but that has not translated into this byelection. Candidate selection was one problem. Ivan Connaughton worked hard and ploughed every furrow but his profile was wrong. The all-male Fianna Fáil parliamentary party badly needed a woman candidate and it should have moved might and maim to find one, even if it was plucking somebody from relative obscurity. That’s not to take away from Connaughton who certainly wore down the shoe leather. But like a lot of things in politics, the timing of this election (and the other circumstances dictating the public mood) militated against him.

Sure, in 2011 and for a long time afterwards it was wearing sackcloth and ashes. Every time Fianna Fáil criticised the Government, it got a biff. But that period of penitence has come to an end. But what has emerged is new form of hybrid opposition - kind of half agree with Government policies and then kind of half moan about them.

What you get is a compromise or in political lingo, a fudge. It’s bad enough when Government do fudges but when opposition parties do them they are condemned to the worst possible fate - a bland and insignificant presence in political life.

Sure, the party does not want to court populism like Labour did in 2011. It’s a strategy that Sinn Féin is seemingly pursuing now (and that strategy has backfired on it in Dublin South West where the party has been called out by voters over its flip-flop on water charges).

Sinn Féin has done well here this time around, with Martin Kenny pulling in a lot of votes in a constituency where it has alway been an also-ran. Can it mount a challenge in the general election? It’s hard to see it doing so.

The constituency will change and lose South Leitrim (where the bulk of Sinn Féin’s votes are and take in a lot of north east Galway). Kenny will struggle to maintain a challenge if he runs in the new constituency.

It still looks tight but after the fourth count, the gap between Connaughton and Fitzmaurice had narrowed to 700. The fifth count will see the distribution of the votes of John Kelly of Labour and of Independent hospital action candidate John McDermot. With 5,500 votes between them, I can see both candidates being neck-and-neck after count five, allowing Fitzmaurice to pull away in the last two counts.

Because Fianna Fáil invested so heavily in this election, the failure to win the seat will represent a huge body blow to its morale. It will prompt questions and quiescence among its TDs and Senators about the party’s leadership and direction. There’s no readymade replacement there for Micheál Martin and he will lead Fianna Fáil into the next general election and beyond (but it’s still the case that he may be the first Fianna Fáil leader never to be taoiseach).

The reality for Fianna Fáil is that its core vote has been falling now for 30 years. The good years of the Celtic Tiger masked that decline because a lot of floating voters gave a stroke to the party which seemingly had the power of alchemy.

But when they deserted the sinking ship, the reality is that very few of them were ever going to climb back onboard.

So where does it leave the party. Well with a core vote in the low to mid 20s, behind Fine Gael. That’s the new reality.

It’s going to have to come up with new ideas, new policies, a new freshness and new faces - and quickly. But it’s hard to see how it can do that over the next 18 months without a ruthless cull.

There was a time when a simple mathematical equation was applied to independents. The more volatile the situation, the more an independent got elected. That was based on the presupposition that it was a temporary phenomenon and once the economy stabilised, the bigger parties restored the status quo.

But that’s not the case any more. Independents and non-party candidates look like becoming a permanent and significant presence in the political landscape.

And in Fitzmaurice they will have a fine representative. I’ve compared him in physique and manner to Ben Dunne with a Glinsk accent (that’s a small village just inside the borders of Galway). He is huge - as dark horses go he’s in the Clydesdale category.

There are more strings to his bow than turfcutting and being a Ming candidate. He’s a very strong communicator and it’s not hard to see why his down-to-earth manner and sociability made him a big draw for voters in this predominantly rural constituency.