Losing its grip: why the Irish political system can no longer guarantee stability

Opinion: What we are seeing are the signs of a slow slide towards an ungovernable State 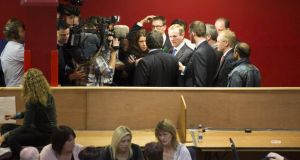 ‘Who, can form the next government? Even the failsafe option of Fine Gael and Fianna Fáil forming their natural coalition is no longer a certainty. The European and local elections show the two parties between them now commanding a minority of votes. And what are the other options?’ Above, Taoiseach Enda Kenny at the count centre for the European elections in Castlebar, Co Mayo earlier this year. Photograph: Keith Heneghan

The descent into political ineptitude of the Government after the troika left town is quite remarkable. Relatively small issues, such as the McNulty affair, were allowed to run out of control. All the big projects – universal health insurance, political reform, Irish Water – have run into the sands. The apparently momentous breakthrough of getting our gallant allies in Europe to agree that our bank bailout is a “special case” has led nowhere. But is all of this a series of unfortunate events, or is there a deeper malaise? Beneath the surface, these are merely the symptoms of the slow slide towards an ungovernable State.

Something big is happening to the Irish political system. It is losing the ability to keep the only promise it ever took seriously: the promise of stability. Since the 1930s, when the 26-county State was shored up by the integration of most of the losing side in the Civil War, the political system has produced one quality above all. It is not brilliance or innovation or social justice or progress, though each has had its moments. The single, abiding quality of the system, its signature dish, is stability.

It created a State that successfully lured into allegiance those who had opposed it in blood, that survived the bonfire of European democracy in the 1930s, that sheltered from the storm of the second World War, that ditched its nationalist economic principles with ease, that did not get drawn into the Troubles raging across a thin Border. The State may have been mediocre in many ways, but it was astonishingly good at being stable.

And the evidence is that, in this, the party system expressed the wishes of most Irish people. Some may have railed that extreme stability locks in both structural inequalities and bad habits. But the Irish as a whole are a cautious lot. History had led them to put stability first, even at the cost of the ultimate in personal instability, mass emigration. We became a paradoxical culture that would put up with almost any amount of disruption to ensure stability. We rewarded the politicians who did that, and they in turn did it very well.

But the crash taught us that stability can lead to catastrophe: keeping the same shower in power for too long entrenched stupidity and corruption. The 2011 general election was not just the most volatile in Irish electoral history; it was the third most volatile of all the general elections in western European democracies since 1945. The only elections that created a bigger upheaval in party representation were the implosion of the Christian Democrats and Socialists in Italy in 1994, when Silvio Berlusconi first came to power, and the Dutch election of 2002, when Pim Fortuyn shattered the established coalition system that had dominated the Netherlands.

Who, for example, can form the next government? Even the failsafe option of Fine Gael and Fianna Fáil forming their natural coalition is no longer a certainty. The European and local elections show the two parties between them now commanding a minority of votes. And what are the other options? Labour, on current evidence, will not be a significant force. Even if Sinn Féin wants to go into government in 2016, and it is by no means certain that it does, it is unclear who will coalesce with it and whether such a coalition would even have the numbers to govern.

Thus, in the most literal sense, the State may not be governable through the present party system. And if a government could be cobbled together, could it create a social consensus, a sense of trust sufficient to allow it to tackle the enormous problems that face Ireland in the medium and long term? All the evidence is that the existing system is unwilling and unable to reform itself. That is an increasingly dangerous failure.