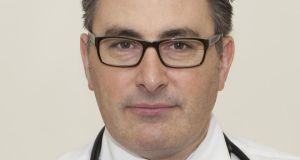 Leo Varadkar letter: the lonely and socially isolated are more likely to die younger, the Senator has told the Taoiseach

The Fianna Fáil Senator Dr Keith Swanick has called on the Government to set up a taskforce on loneliness.

Dr Swanick, a GP based in Belmullet, Co Mayo, and party spokesman on health and mental health in the Seanad, said on Wednesday that there was an “epidemic of loneliness’’ in Ireland and that the taskforce should set out practical solutions.

“Every day of my professional life I meet people who are lonely,’’ he said. “This loneliness can have a devastating impact on people’s mental and physical health, with corresponding challenges for public services.’’

In a letter to Taoiseach Leo Varadkar, the Senator said a survey by physicians on loneliness and social isolation found sufferers were more likely to die younger than nonsufferers.

Dr Swanick said it was not caused solely by rural isolation, adding that he had found it also existed in urban communities when he worked as a GP in Dublin. He said the percentage of over-70s was growing faster than the rest of the population. There was also an increase in the number of single-person households, he added.