Vote 2019: Ireland heads to the polls for elections and referendum

The divorce referendum in 1995 was a divisive affair that brought vocal support from either sides. Video: Reuters 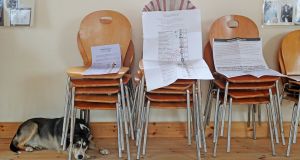 A dog named Lucky waits for its owner to cast their vote in the polling station on Inishbofin on Thursday. Photograph: Niall Carson/PA

Polling stations around the country opened at 7am on Friday for the local and European elections, the referendum to change the constitution on divorce and, in Cork, Waterford and Limerick, plebiscites on directly-elected mayors for the cities.

More than 6,500 polling stations remain open until 10pm, and the sorting and counting of votes will begin on Saturday at 9am at 29 count centres around the country.

Voting took place on Thursday on some offshore islands. Between 3.3 and 3.4 million people are eligible to vote in the different polls.

In all cases, voters must appear on the register of electors or the supplementary register to be allowed vote. They may be asked for identification at polling stations.

In the local elections, just under 2,000 candidates will contest 949 seats in the 31 local authorities. Counting of votes will begin when the ballot boxes are open at 9am on Saturday morning, but there will be an RTÉ exit poll after the close of polls on Friday. The results of the poll’s findings will be announced during the Late Late Show after 10pm.

Once the votes are sorted, counting of local elections and referendum votes will begin on Saturday. European election votes will not be counted until Sunday and the results of the first count won’t be announced until the polls close elsewhere in Europe at 10pm that night.

While many local election results will be known by Sunday evening, it will most likely be into the middle of the week before 100 per cent of the results are finalised. EU leaders meet for an informal summit over dinner in Brussels on Tuesday evening to consider the results of the European Parliament elections.

Minister for Housing, Planning and Local Government Eoghan Murphy, whose department oversees the management of the elections, urged people to go out and vote on Friday. “You have the opportunity to cast three very important votes, the first two in the Local and European Elections, and the third in the Divorce Referendum. If you live in Cork city, Limerick or Waterford you will also have a fourth important vote on whether or not you want a directly elected Mayor,” he said. “Polls will open at 7am and close at 10pm. Make sure you bring a form of identification to your polling station. I urge the entire country to make sure your voice is heard and go out and cast your vote.”