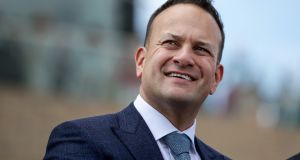 Leo Varadkar on Fine Gael’s performance: “It was less than we had expected or hoped for, quite frankly”. Photograph: Laszlo Geczo/Inpho

Deputy Political Editor Some in Fine Gael gamely attempted to talk up the party’s performance in the local elections on Sunday as the numbers came into sharper relief, but Taoiseach Leo Varadkar bluntly acknowledged reality.

“It seems our vote is up slightly: maybe one, one-and-a-half per cent, and we will gain 10-15 seats, which is less than we had expected or hoped for, quite frankly,” he told RTÉ radio.

Initially Fine Gael had bullish hopes of wanting to displace Fianna Fáil as the largest party of local government. Then expectations were moderated, and party figures said winning an extra 40 seats, while staying in Fianna Fáil’s slipstream, would be a more realistic goal.

Varadkar’s projections, as of Sunday evening, fell substantially short of even the revised aim. However, the European Parliament elections were a far more successful outing, with Fine Gael in line for at least three and probably four, with an outside shot at five, MEPs. The self-proclaimed party of Europe will take some satisfaction from that.

However, the election postmortem will focus on local contests, which are traditionally a better forecast of the general election to come.

Varadkar said the Dublin council figures were especially disappointing, particularly when Fine Gael has consistently polled between 25 per cent and 35 per cent in the capital over recent months.

The Greens picked up middle-class votes in places where Fine Gael would have expected to dominate, while Fianna Fáil rebuilt in some of its old working-class heartlands as Sinn Féin imploded.

The rise of the Greens, if even partially reflected in a general election, will damage Fine Gael’s capacity to pick up Dáil seats around Dublin. Allied to that, Fianna Fáil’s improvement in the capital puts Varadkar and Fianna Fáil’s Micheál Martin on pretty even terms ahead of the general election.

Fianna Fáil made progress on Dublin City Council, and increased its vote share in areas like Ballymun-Finglas, where one of the key battles of the next general election – between Fine Gael’s Noel Rock and Fianna Fáil’s Paul McAuliffe – will play out.

Senior Fine Gael figures say they will take stock over the coming days from a party and Government point of view. Sources cautioned, however, against overstating the strength of the Green wave, pointing out that around 93 per cent of voters did not vote for Eamon Ryan’s party.

“In northside Dublin, concerns of working-class voters need to be listened to and acted on. The wave was two shades of green here: the Greens, yes, but Fianna Fáil too.”

At a government level, Richard Bruton’s All of Government Plan to Tackle Climate Disruption will be published in the next two weeks.

It is understood the plan has seen a number of changes from earlier drafts – it is said to have become “a bit more ambitious” – and will be still be subject to last- minute finessing.

At times in government such a process can lead to a dilution of aims and goals already agreed. Sources pointed out, however, the performance of the Greens would make any efforts to do so by nervous Ministers much more difficult.