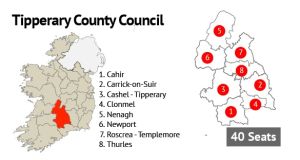 Independent TD Michael Lowry announced before the local elections that his political group would be running five candidates in a bid to improve on the three already held, and all five have been elected to Tipperary County Council.

The former minister and Fine Gael member’s son Micheál Lowry topped the poll in the Thurles electoral area while John “Rocky” McGrath, who lost his council seat in 2014, was returned for the Newport LEA.

The other big winners in Tipperary were Fine Gael, who increased their seat share from 10 to 12, with their percentage of the first preferences going up from 26 to 27%.

Fianna Fáil also boosted their first preferences by over 2%, but ended up losing seats, including that of outgoing council chairman Mattie Ryan “Coole” who lost in Newport to party colleague John Carroll.

It was a bad election in the county for Sinn Féin, whose Carrick-on-Suir outgoing councillor David Dunne was their only representative in Tipperary to increase his vote share. Catherine Carey ended up in a battle for the last of six seats in Clonmel and ended up losing to Niall Dennehy while in Cashel-Tipperary, the party’s two candidates Cllr Martin Browne and Tony Black were neck-and-neck throughout the weekend before Black took the penultimate seat, with independent Annemarie Ryan of the MarchforTipp protest group also successful.

Sinn Féin failed to make an impact in any of the other five electoral areas and the result in Thurles will be a particular setback for the leadership as their candidate for the next general election, Ciara McCormack, won just 267 first preferences.

Having lost two of the five council seats it won in 2014 to defection in the last year, Sinn Féin may now need to rethink its strategy in the county and supporters of David Dunne will be pressing for him to be put on the general election ticket.