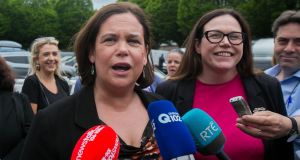 It was always going to be a challenge for Sinn Féin to hold the council seats it won five years ago in this year’s local elections, party leader Mary Lou McDonald has said.

Ms McDonald was speaking at Dublin’s RDS as counts continue in what is expected to be a disappointing local election for Sinn Féin.

In 2014, the party won 159 seats in the local elections on the back of a surge driven by voter reaction to the economic crisis and issues such as water charges. The Dublin Central TD said some of those seats will be lost.

“Five years ago there was a Sinn Féin surge and five years ago we won 100 extra council seats in local authorities the length and breadth of the State, and of course in this campaign our objective was to hold each and every one of those 100 seats,” she told reporters.

“That is not going to be the case. Today is the Greens’ day. They have surged on this occasion and more power to them. It would be churlish not to acknowledge that and to wish them well.”

Ms McDonald said her party is still “in the hunt” for a European Parliament seat in each of the three constituencies in the Republic, as well as one in Northern Ireland.

“You take the rough with the smooth, you dust yourself down, you get back at it, because the politics of Sinn Féin is about big social and political change, North and South,” she said.

“I am not shellshocked. I never played the numbers game because I knew when you are working from a very high base, following a huge surge five years ago, that the challenge is, in the first instance, to hold what you have.

“I am disappointed for our people who ran and who served for the last five years and who I know wanted to continue that service for the community.

“Sinn Féin aren’t crybabies. We’ll dust ourselves down and we get back at [it] because that is what political activism is all about.”

She said the “huge surge” to the “Greens affected everyone and it affected us”.

“There were many candidates who share much of the broad politics that we represent.”

When asked if another poor election result could lead to question marks over her leadership, she replied: “Leaders are charged with leadership come what may. So it is easy to lead and be a political activist when things go your way and the surge is on.

“Those are great days. But you also have to be ready . . . [for] when things are more challenging.”