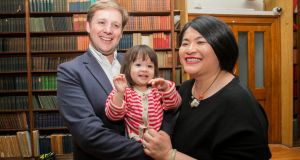 Not only was she the first Green councillor elected in Dublin city in what was clearly going to be an astonishingly successful day for the party, but she was the first of 63 city councillors elected.

Ms Chu’s fiance, Patrick Costello, one of the three sitting Greens on the city council, also topped the poll in his ward.

“When I heard that I was very proud – though I’m not sure he’ll love the fact he’s be working with me as well as living with me,” she joked.

Ms Chu, born in Ireland to parents from Hong Kong, said: “Politics was never part of what we do. Both my parents were kitchen workers, they washed dishes. It wasn’t until I met my partner Patrick . . . that I decided to get involved in the Greens. I decided you know what, I’ll put my name forward.”

Ms Chu has worked hard for the party in the background as a national co-ordinator, but is also its spokeswoman on enterprise. She said she looked forward to working across the council on a range of issues.

“I hope there can be a lot of good cross-party work on issues such as housing. Everyone accepts we need to build more housing, and we also need to see cost rental developed. Housing needs to be a genuine priority, not just rhetoric and an election promise, and we need to look at the long term.”

Her initial reaction to being elected was “relief”, she said. “It’s a bit overwhelming but a great privilege to be elected. I did see the polls, but this still came as a complete surprise.”