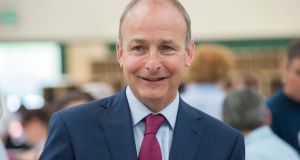 Fianna Fáil leader Micheál Martin has rejected any suggestion that he might withdraw from the confidence and supply agreement with Fine Gael and trigger a general election on foot of Fianna Fail’s solid showing in the local elections.

Mr Martin said he never subscribed to the view that local elections were a barometer regarding what might happen in a general election and he was fully committed to honouring the pledge he made before Christmas to continue with the Confidence and Supply deal in the face of a possible no-deal Brexit.

Mr Martin admitted that Fianna Fáil’s continued support for the minority Fine Gael administration had proved problematic on the doorstep with many voters urging the party to withdraw from confidence and supply deal but he believed they had done the right thing by continuing to honour it.

Mr Martin said that it was early yet but it appeared from tallies around the country that Fianna Fáil was consolidating the gains it made in the 2014 local elections and perhaps making some gains including in parts of Dublin where it had been without representation for some time.

“There are some exciting potential results coming our way in places like Dundrum, Tallaght and Dublin south inner city, places where we didn’t have representation for quite some time. We will be watching that very carefully and the early tallies are very positive in that regard.”

‘Positive about the future’

Mr Martin said that Fianna Fáil had also done well to overcome boundary changes in Cork City Council and the retirement of a number of sitting councillors but appeared to be on course to retain its ten seats on the 31 member council.

“We are positive about the future. It is a very fragmented situation right now — I want to pay tribute to the Green Party. I think they did well. Eamon Ryan and myself, we came in after the 2011 General Election and we have ploughed a lonely furrow at times.”

“He is having his day today and I pay tribute to him for his leadership in that regard. It is going to be fascinating to see — there have been some big stories in this election. For two years we have watched opinion polls telling us that Fine Gael were ten clear points ahead of Fianna Fáil.”

“That has evaporated — I don’t know where the Sinn Féin vote is but they face challenges in some areas in terms of seats. Everybody is impacted — we seem to be holding our own in the local elections but it is a cautionary tale because there are a lot of counts to go.”

“When this is all over and the final votes are counted, a bit like 2014, it could be very good for the party. Notwithstanding the Green surge, I think this could be a very good result for us,” Mr Martin said during a visit to Nemo Rangers GAA Club in Cork where Cork city votes are being sorted.