Long is not short of Senators to help with her canvass

BusConnects, rural broadband and property tax are some of the issues that keep cropping up at Dublin doorsteps 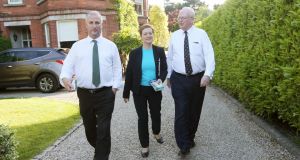 “Let’s be honest,” says Padraig Hartigan, as he gestures towards his well-to-do neighbourhood of St Kevin’s Park in Darty, Dublin 6. “What issues do we have compared to other places?”

Even so, Hartigan, being canvassed by Samantha Long, an Independent candidate for the Kimmage-Rathmines ward of Dublin City Council, has the same concerns as many others around the capital.

The “traditional Blueshirt voter” raises the controversial BusConnects plan, the cost of the rural broadband scheme and the housing crisis with Long, who is accompanied by Senator Michael McDowell, formerly a TD for the area. These, along with climate change and property tax, are issues that crop up repeatedly on Long’s canvass.

The property tax is grossly unfair on Dublin people

“The €3 billion broadband,” says Hartigan. “It seems like we are in Stalingrad . . . we are stuck here and we have to fight to the end. Does every rural household have to be linked into this?”

He adds: “ Leo comes across as more style than substance, and he just doesn’t do it for me.”

“That is part of that famous Project 2040,” she says of BusConnects. “The signatures of Leo Varadkar and Eoghan Murphy are on that document.”

Long works for McDowell and his group of Independent senators – another of whom, Victor Boyhan, is also on the canvass – in Leinster House, and this year’s local elections are her second attempt at securing a spot on the council.

She ran for Fine Gael five years ago, but subsequently left the party. Her treatment by Fine Gael was brought up unprompted on another doorstep in Sunbury Park, where the female voter, who did not want to be named, promises a first preference.

Long, who was adopted with her twin sister Etta from St Patrick’s mother and baby home in 1972 when they were both nine months old, says she was told by Fine Gael after losing in the 2014 local elections that she would be top of the list for a Seanad seat vacated by Deirdre Clune, who was elected as an MEP five years ago.

A fiasco around that Seanad byelection saw efforts by then Fine Gael leader Enda Kenny to elect Donegal councillor John McNulty to the Upper House backfire. The seat went to Independent Gerard Craughwell.

“You get a text from Mary Mitchell O’Connor at midnight one night to say there is this guy called John McNulty, and you feel like you have been punched in the face,” reflects Long.

McDowell introduces her on many doorsteps. One voter, Rhona Coleman, says she and her friends were “very upset” when he lost his Dáil seat in 2007.

A common view in Leinster House is that he is kicking the electoral tyres during the local elections as he mulls another run for the Dáil, and he raises some of the same issues he has in the Seanad.

“The property tax is grossly unfair on Dublin people,” he tells Patricia Browne. “It is not applicable to your house or mine but there are people living in artisan dwellings in Portobello and places like that who are paying twice what people living in a house like this in Mullingar or Tullamore are paying.”

When asked of his future intentions, he coyly replies: “I simply say this. It is nice to be appreciated.”