Local election result may be challenged amid electoral fraud allegations 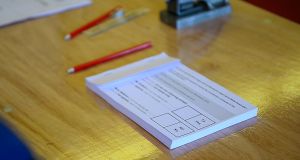 A legal action may be mounted by Fine Gael challenging the result of the local elections in Sligo. File photograph: Bryan O’Brien/The Irish Times

A legal action may be mounted by Fine Gael challenging the result of the local elections in Sligo, where the party has made a complaint to gardaí about alleged electoral fraud, following a surge in the number of postal votes registered in one area.

The number registered in the Ballymote-Tubbercurry electoral area as being entitled to a postal vote due to illness or disability has almost doubled since the last local elections.

Sligo County Council has confirmed that 252 postal votes for “physical illness or disability” have been registered in the Ballymote-Tubbercurry electoral area – up from 131 in 2014 and 159 in 2009. The figures for the other electoral areas in the county are 20 in Sligo-Strandhill and 17 in Sligo-Drumcliff.

Enda Candon, director of elections for Fine Gael in Sligo-Leitrim, said that, in the last local elections, one candidate lost out by just one vote, and a second candidate by six votes. He said that if it was established that the inclusion of a number of invalid votes affected the outcome of this election, a legal challenge would be considered. Mr Candon said that based on local knowledge and investigations by the party, they now believed that between 80 to 100 postal votes were “questionable”.

Mr Candon said that an examination of the list of registered postal voters showed that many were living in New Zealand, Australia and the US, and that the list included three Polish men previously based in Sligo who had returned home some years ago. “It is quite blatant,” he said. “We believe there are people living abroad for 10 years on the list and indeed one man has been in England for 35 years.”

Mr Candon said the “voters with disabilities” included people who played football and other sports, as could be seen on Facebook and other social media.

“And one of the things that surprises us is the silence of the other parties on the topic.”

Mr Candon said that a formal complaint had been made to gardaí a week ago by Tom Curran, general secretary of the party.

In a statement, Sligo County Council said that more than 20 medical practitioners had signed the relevant documentation for postal vote applications for the Ballymote-Tubbercurry electoral area.

The council said it was not in a position to disclose their names for data protection reasons. The council said it had carried out an examination of all of the applications submitted for inclusion in the postal voters list for illness or disability. The documentation presented in each case was in accordance with requirements of the relevant legislation.

“At the time of application for inclusion in the postal voters list all applicants are required to declare that they are unable to go in person to vote at a polling station by reason of a physical disability, and that they are ordinarily resident at the address given,” the council said.

All applications had included the required medical certificate signed and stamped by a registered medical practitioner, certifying that the applicant had a stated physical illness or a physical disability and was unable to go in person to a polling station to vote, it added.

The council said it was aware that a formal complaint had been made to gardaí in relation to a number of those on the postal voters list. “We will assist the gardaí with any enquiries, and will furnish any material documents in our possession to them,” it added.

The council also confirmed that it had sought legal advice following speculation that the election might be delayed because of the fraud allegations. It said the polling day had been fixed by ministerial order for Friday, May 24th, 2019, and the Notice of Election had been published by Sligo County Council.

“There is no provision in law to defer or delay an election, other than in the case of the death of a candidate before the commencement of the poll,” the council said. The council confirmed that there was legal provision to question the outcome of a local election by way of a petition in the Circuit Court within 28 days of the declaration of the result. Mr Candon said this was an option which would be considered pending the outcome of the election.

Gardaí confirmed that a complaint has been received and is being investigated.