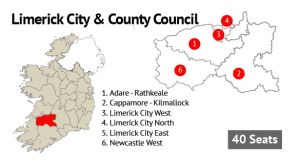 Limerick’s first Muslim councillor has been elected to rapturous celebrations from supporters at the Limerick count centre.

Abul Kalam Azad Talukder was elected around 4am Monday, on the final count (count 14), in the Limerick City West area.

Talukder, a first time election hopeful, thanked Fianna Fáil for “believed in me and trusted in me” as well as “all those who voted for me”.

“I promised them I would bring this seat. I’m delighted.”

“It is a dream come true. It is history. It doesn’t come overnight or with dreams - you have to work at it,” he added.

Talukder said his priority would be to weld together the migrant and Irish community in Limerick.

Green Party candidate Breandan Anra MacGabhann put in a sterling effort but was left just shy of taking a seat.

Earlier, former Limerick mayor Joe Leddin retained his seat in the constituency, after having exceeded the 1,324 quota, on Count Thirteen.

In Limerick City North, Sinn Fein returned two seats to Limerick City and County Council, after what had been a disastrous day for the party.

Both were elected without having reached the quota 1,477.