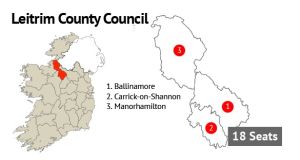 Independent councillor Gerry Dolan, one of the great survivors of local politics in Leitrim, has been re-elected after a marathon recount.

The recount was called by Sinn Féin after Mr Dolan found himself four votes ahead of the party’s Pat Gilhooly on the seventh count for the last seat in the Ballinamore local election area (LEA).

Two contests in Leitrim finished in cliffhangers with a four vote margin. Fintan Cox conceded defeated when he was pipped to the last seat by his Fianna Fáil running mate Pat Farrell in the Carrick-on-Shannon local electoral area.

In an incredibly close finish, Mr Cox and Mr Farrell were both tied on 737 votes each at the end of the sixth count with the distribution of 15 votes from Fine Gael councillor Thomas Mulligan being the deciding factor.

Mr Cox opted not to opt for a recount, but Sinn Féin decided to call one rather than proceed with the seventh count in the Ballinamore area.

Mr Dolan was on 845 votes and Mr Gilhooly on 841 votes when counting finished at 4.30am on Sunday morning. It resumed at 2pm on Sunday.

The recount increased the margin of victory from four votes to six and Mr Dolan was declared re-elected at 7.30pm on Sunday evening.

All six councillors in the Manorhamilton were re-elected. Fianna Fáil’s Mary Bohan topped the poll and was elected for the 10th time in a row. She has been a councillor for 40 years. She will be joined on the council by Padraig Fallon (SF), Justin Warnock (FF), Frank Dolan and Sean McDermott (FG) and Felim Gurm (Independent).

Fianna Fáil’s councillor Paddy O’Rourke recorded one of the biggest votes in the history of Leitrim County Council when he polled 1,365 votes in the Ballinamore local electoral area which was 400 votes over the quota.

He put his victory down to “old-fashioned shoe leather” and claimed to have canvassed every door between Carrigallen and Dowra village.

Only three women were elected to the 18 member council. Ida Reynolds-Flynn is the latest member of the Reynolds family to be involved in Leitrim politics.

Her grandmother Mary Reynolds was a TD between 1932 and 1961. Mrs Reynolds-Flynn is one of the first women ever to be elected in the Ballinamore local electoral area. She is the sister of former Fine Gael TD and senator Gerry Reynolds.

Six Fianna Fáil councillors were elected along with six Fine Gael, a gain of two for Fine Gael. Sinn Féin were reduced from four to two seats and four independents were also elected.