Labour, Greens and Social Democrats can play key role in next election 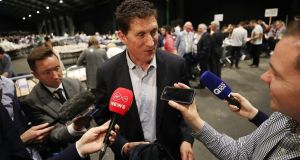 Now that the dust has settled on the European and local elections. the outcome looks less dramatic than initial reports suggested. True enough, the Greens made a comeback and Sinn Féin got a bloody nose but the old firm of Fine Gael and Fianna Fáil continue to dominate the political landscape pretty much as they have done for almost a century.

Most of the focus has been on the Greens, partly because the RTÉ exit poll exaggerated the scale of the party’s gains. That dictated the political discourse in the days after the elections and meant that other trends were obscured or ignored.

For all the hype about the Greens, the party’s local election vote of 5.6 per cent and its haul of 49 councillors was hardly a political earthquake. To put that performance in context, the Labour Party, which has barely got a mention in the post-election coverage, won 5.7 per cent of the vote and increased its number of councillors to 57.

The European elections put a better gloss on the Green performance with the party winning 11.3 per cent across the three constituencies but the Euros are a notoriously unreliable guide to future Dáil performance. Remember, the Greens held two European seats from 1994 to 2004, so they have been here before.

Spirit of the age

Still, taken together the two elections indicate that the Greens are now positioned to become a bigger force in Irish politics. They are in tune with the spirit of the age, at least in the western world where there is a strong focus on the future of the planet, so the party should be able to gain Dáil seats at the next election.

The Greens differ from most of the other anti-establishment parties in that they have a clear policy agenda and are not reliant on the politics of anger. They were prepared to follow the logic of their position and support the introduction of a carbon tax at the Oireachtas climate change committee, unlike Sinn Féin and the hard left who opposed it.

Fine Gael must now regret that it deferred publication of the Government’s climate action plan until after the elections for fear of annoying a variety of interest groups. It missed a chance to lead the debate and will now be seen to be following the Greens when the plan is published in a few weeks.

The drop in support for Sinn Féin was a notable feature of the elections. The loss of Lynn Boylan’s Dublin seat was a serious blow but what will probably worry the party even more was the local election performance across the country where it lost almost half its council seats.

When Mary Lou McDonald took over as party leader there was a lot of media speculation about Sinn Féin entering coalition after the next general election. Now the challenge will be to try and hold the 23 seats it has. If its vote falls to less than 10 per cent in line with the local election outcome it will inevitably lose Dáil seats.

The last two local elections have been a more accurate guide than opinion polls to the outcome of the subsequent general elections. In 2016, Fine Gael, Fianna Fáil and Sinn Féin all polled within a percentage point of their local election performance two years earlier.

This time around Fine Gael and Fianna Fáil between them won just over 50 per cent of the vote, marginally better than their combined performance in 2014 and 2016. Fianna Fáil will be the happier of the two as the party maintained its local election lead over its rival if only by a narrow margin.

What will really please Fianna Fáil is that the party made a strong comeback in Dublin in its old northside strongholds. This is a good omen for the future as the party was down and out in the capital after the financial crisis. Now it has recovered sufficiently to be the biggest party on Dublin City Council, a remarkable turnaround since 2014.

Fine Gael will be disappointed not to overtake Fianna Fáil in council seat numbers. Its strong European election performance will be some compensation but the gains it made in the Dublin region where it ended up as the biggest party are probably more significant.

The Labour Party struggled to make its voice heard in the campaign but it managed to win more seats and with the decline of Sinn Féin and the hard left it now has an opportunity to try to recover lost ground. The Social Democrats had a good election as well, gaining votes and council seats with a strong performance by Gary Gannon in the Dublin European election.

If Labour, the Greens and the Social Democrats can form some kind of alliance, as suggested by Brendan Howlin, they could play a crucial role in the formation of the next government. Whatever happens in the coming months it is certain that Fine Gael and Fianna Fáil will be the two biggest parties after that election but each will be well short of a majority. That will create opportunities for other parties willing to take the responsibility for governing rather than shouting from the sidelines.