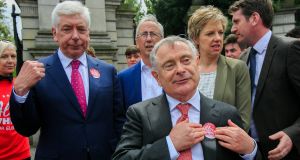 The Labour Party and Green Party have held talks to form a “civic alliance” at local government level after this week’s elections.

It comes as Fianna Fáil leader Micheál Martin said he would not be following Fine Gael’s lead in ordering councillors not to enter any pacts with Sinn Féin.

The main political parties on Wednesday outlined their final pitch for the local and European elections as the country gets set to go to the polls on Friday.

Labour Party leader Brendan Howlin said he spoke to Green Party leader Eamon Ryan on Wednesday to discuss an alliance after the votes are counted.

“We talked . . . about perhaps a new civic alliance, where Greens and Labour would work together to look at climate change at a local level. I would be really anxious to explore that with the Greens on councils across Ireland after this election.”

He said he had asked for Labour supporters to transfer to progressive Independents. “We need progressive alliances at local level, national level and European level if we are going to counter the growth of populism. I hope other parties will reciprocate.”

It emerged earlier this week that Fine Gael had instructed its councillors not to enter into any pacts with Sinn Féin on local authorities. Micheál Martin said he would not be following suit.

“Things must be getting desperate,” he said. “I mean, they’ve been in a pact all around the country with different parties, including Sinn Féin.

Mr Martin said the main issue on the doorsteps was housing and warned that the problem was becoming more acute. He criticised Minister for Housing Eoghan Murphy’s recent comments on co-living. Mr Martin described it as “battery-cage type accommodation.”

At a final election event, Minister for Social Protection Regina Doherty said she did not think Fine Gael would be punished in the local elections for the housing crisis.

Fine Gael European candidate Mark Durkan said the party was focused on trying to win two seats in the Dublin constituency, namely for himself and former tánaiste Frances Fitzgerald.

People Before Profit also held a closing press conference and said that voters could “punish the Government” by turning out and casting their ballot.

In the North, where voting in the European elections takes place on Thursday, the vote is being framed – particularly by pro-remain parties – as an opportunity for people to make their voices heard on Brexit.

“The closer people are to the Border, the more it means to them,” said BBC election number-cruncher Gerry Murray. “Nationalists in general are really fed up with the Brexiteers and the Tory government, and this is a chance for them to vote in a way that will send a message to them.”

Martina Anderson of Sinn Féin is expected to be re-elected, as is Diane Dodds of the DUP. The third seat, which had been held by Jim Nicholson of the UUP, “is up for grabs”, said Murray.

Between the SDLP, Alliance and Green Party voters, “there is a quota”.

“If they transfer between themselves, the third seat would go to either Colum Eastwood or Naomi Long.”

The Border issue means Murray expects a higher turnout west of the Bann, which will in turn favour Sinn Féin and the SDLP; what will be interesting, he says, is whether the pattern from the North’s council elections earlier this year is repeated.