Kathy Sheridan: What is the point of county councillors?

Just 8.4% of funds flow through local government compared with Denmark’s 66% 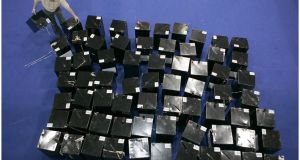 Local candidates: what constitutes the massive workload of which they speak? Photograph: Dara Mac Donaill

Have a care when your stubby pencil is poised over that long local candidates list on Friday. Be aware that two out of three councillors have suffered mental stress as a direct result of their political role.

Almost half have experienced depression or anxiety and nearly eight in 10 have felt their role as a councillor was impinging on family or personal life, according to research by Fianna Fáil Senator and GP Dr Keith Swanwick a few years ago.

Stories of epic self-sacrifice, public intrusion and 70-hour working weeks have been told at joint Oireachtas sessions. Councillors can’t go to the toilet without someone looking for something. One opened his door on Christmas morning to a family who said they had no electricity and couldn’t cook their dinner. A councillor is . . . “ a bit of a cross synergy really because you’re a bit of a priest, you’re a bit of a social worker, you’re a bit of an advocate and, to a lesser extent, you’re a bit of a politician, and you have to juggle a lot of demands, a lot of asks, in your own community”, according to Senator Victor Boyhan.

With your pencil poised, you may wonder what that even means.

Can they still give you a whoosh up the housing list ? Get you a medical card? Swing a planning decision for a bijou garden mews ? Not a chance. Refuse collection, water services, student grants, even driving licences have all been whisked off their bailiwick. And though the best of them have good ideas on this election’s burning topic – the housing crisis – it is central government that controls the funding. The fact that Sinn Féin and other parties of the left hold the majority on Dublin City Council and haven’t dented the problem is revealing.

Refuse collection, water services, student grants, even driving licences have all been whisked off their bailiwick.

Fact: just 8.4 per cent of government spending flows through local government compared to 66 per cent in Denmark, according to Dr Mary Murphy of Maynooth University.

The very issues that councillors still claim as the bulk of their killer workload have been stripped away from them. But rather than harness these golden few weeks in the spotlight to publicise this, many choose instead to talk up their powers. Meanwhile, councillors and their Oireachtas advocates are in constant battle with government departments for pay and conditions they deem commensurate with their working hours and workload.

At the same time many of the same Oireachtas advocates are half-dead trying to win or keep a Dáil seat by tramping all over the same councillors’ patch. The abolition of the dual mandate 16 years ago was meant to achieve the separation of national and local government. Yet a 2010 survey found that on average, Irish TDs were spending over half their working week on constituency-based work.

Still, somehow, the net result is that local councillors feel desperately overworked and underpaid. Since the big 2014 local government reforms, they claim the job is now full-time in all but name.

A look through the declarations of interests submitted by 52 Dublin city councillors for 2017 suggests that half declared no other occupation or profession. Another seven had jobs in the political arena as researchers, constituency office assistants or advisers.

According to a 2016 survey by the department, nearly a third of local councillors nationally are entirely dependent on their council income (a “representational payment” worth €17,060 a year plus about €6,000 to €7,000 in expenses) and said they were spending 26 or 27 hours a week on council business. John Paul Phelan, the minister in charge, took that as confirmation that a councillor’s job is not a full-time role.

So what is the role in 2019? How much of their work is simply to be expected of decent, elected representatives intent on serving the local community and how much is a vote-gathering staging post en route to greater political heights ? Solidarity TD Ruth Coppinger – herself a councillor for 11 years – asserted at the joint committee that “it is not a full-time job, although some councillors make it one because they decide to go to the opening of every envelope in the community”. The fact is, she said, the workload varies “dramatically” between wards (some say even within wards).

So what precisely constitutes this massive workload of which they speak? How many hours of it should be paid for ? Should they have secretariats like TDs and Senators? Senior barrister Sara Moorhead has accepted the delicate task of separating the facts from the hype. In her interim report, she laid out the argument for full-time councillors versus the expectation of attending to council functions in the working day. The first, critically, would effectively bar community-minded souls from other walks of life, which is hardly desirable. “The two positions are going to be very difficult to reconcile,” she wrote, “and to do so without clearly defining a future way forward for local government as a whole.”

Mark that last sentence. Councillors’ pay is the least of the problem. Let every responsible candidate begin right there.