Kathy Sheridan: Polls remind that resilience is a pillar of politics 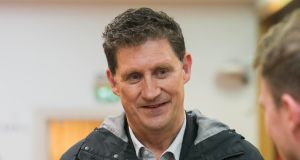 Did you gaze upon all those bright, young Greens beaming out of Monday’s front page and find yourself smiling back at them? Did you look at the face of Green party leader, Eamon Ryan, and wonder how he has endured?

Still scorched in the memory from the 2011 general election count are the scenes outside the RDS count when all six Green TDs had been booted out by a raging electorate after a term in political hell. Onlookers urgently examined their shoes while Ryan assured supporters, “we’re not going away”.

Come 2016, there he was, not only back in the Dáil but unsettling several of the politics-as-usual merchants by making a speech about love. “We stand for love in this House”, he said in response to a mass murder in a gay night nightclub in Florida. “It seems that our world at the moment is full of people who are evil and who are willing, all so easily, to dishonour others . . . a world which is self-seeking, which is easily angered and which keeps a record of wrongs.” He may be a national treasure.

Resilience is a quality admired in almost every human type – except in politicians, where it is dismissed as sheer brass neckery

Monday was one of those rare days in politics. A day of lightness, kindness and goodwill, the feeling that permeates a happy wedding when everything seems possible. This was the anti-swing, the anti-spin, the anti-cynic, the anti-politics-as-usual story. Ultimately, it was the triumph of resilience. The endurance of those old Greens.

Resilience is a quality admired in almost every human type – except in politicians, where it is dismissed as sheer brass neckery (that’s the polite version). But take a look at the extraordinary Naomi Long, leader of the North’s Alliance Party, now the North’s first non-traditional-party MEP, who has held the centre ground through lonely stagnation, death threats and excruciating endometriosis. Look at Fianna Fáil’s Mary Fitzpatrick who prevailed against the worst the old diggers of Fianna Fáil’s so-called Drumcondra mafia had to offer – remember the Cyprian Brady run? – and is still standing long after most would have surrendered. At the weekend, she headed the poll in Cabra, Mary Lou McDonald’s home patch, and is revving up for yet another run at the Dáil.

And quietly, out there in the fringes, there is Terence Flanagan, described merely as a Fine Gael local election candidate for Donaghmede in north Dublin. His politics will not excite many here but Flanagan is the former Fine Gael TD who in 2015 defected to a brand new party called Renua and helped to launch it with – up to this week at least – one of the most excruciating radio interviews in recent political history.

He suffered what anyone with a titter of sense has nightmares about : a mental blank on live radio. Sentences were eked out but led nowhere and faded away. It was a party “that’s going to ensure promises . . .”, he said but he was unable to complete the sentence.

After a short silence, Mary Wilson asked him what the party had to offer to PAYE workers. “Emm, for the... the PAYE workers?” he said, before seizing up again. Amid sounds of rustling papers, Wilson mercifully called a halt: “Terence I think we’ll leave it there for today.”

A year later, he lost his seat. But the big news for all bashful public speakers everywhere is that Terence Flanagan is back. Last weekend, he won a city council seat for ,yes, Fine Gael.

You may raise your eyebrows at his trajectory, but no one can dispute the man’s resilience. And for a few weeks at least, it should be possible to admire all those who found the will to clean themselves up, pull on the comfortable old shoes, leave the tranquillity of the house and brace themselves for all the human race had to throw at them over the years. Especially the ones who have failed and failed again.

Only those with a personal involvement can truly know the sharpness of the serpent’s tooth that is the thankless voter. This week, Ken Curtin, a Social Democrat candidate in the Cobh area, tweeted his feelings about his “beyond disappointing” vote: “It’s time for Ken the family man and earner to step forward and Ken the volunteer who tries to help/please everyone for no personal rewards (often the opposite) to take the back seat . . . This result has given me the opportunity to review my priorities and I’ve clearly had them in wrong order for some time.”

This is one of the reasons why solidarity usually prevails between exhausted political rivals in the counting halls and why the sight of protesters in the RDS roaring “Stick your co-living up your a**e” at Eoghan Murphy within a few feet of wrung-out candidates and vote counters seemed so jarring.

The old dogs know this. Back in 2011 at the RDS count, the rising star was Eoghan Murphy, aged 28, preternaturally confident, known as “Councillor Yummy” to a certain cohort and being likened to a “young JFK”. It’s the circle of life – the political version.