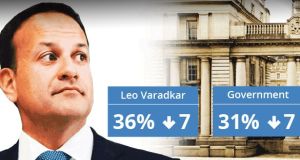 Satisfaction with Leo Varadkar has fallen by seven points to 36%, the lowest level since he became Taoiseach in 2017.

Satisfaction with Mr Varadkar has fallen by seven points to 36 per cent, the lowest level since he became Taoiseach in 2017, and is the latest evidence of a continuing decline in his personal popularity from the high levels seen when he succeeded Enda Kenny.

The Government’s approval rating is also down by seven points, from 38 per cent in March to 31 per cent today.

The poll shows support for Fine Gael is down marginally (by a point) while Fianna Fáil’s backing is up by two points. While both movements are within the poll’s margin of error, today’s figures show the gap between Fine Gael and Fianna Fail, at just three points, is at its smallest in 2½ years.

Elsewhere, the poll continues many of the trends of earlier this year, with a significant drop in support for Sinn Féin, and gains for the Greens, Labour and Independents.

The “core” vote for the parties – that is, before undecided voters and those unlikely to vote were excluded – compared with the last Irish Times poll in March, was: Fine Gael 21 per cent (no change); Fianna Fáil 20 per cent (up two); Sinn Féin 12 per cent (down four); Labour 6 per cent (up one); Independents/others 18 per cent (up three). Undecided voters were at 23 per cent, down two points since the last poll.

The poll was taken on Tuesday, Wednesday and Thursday of this week among 500 voters in each of the three European Parliament constituencies, a total of 1,500 voters across 150 sampling points in all constituencies. The accuracy is estimated at plus or minus 2.5 per cent at the national level.

Voters were also asked how they intended to vote in the forthcoming local elections. The results largely mirrored general election voting intentions, but with the gap between Fine Gael and Fianna Fáil even tighter and a higher level of support for Independents and small parties. Asked for their reasons for voting for a particular candidate in the local elections, the most popular choice was because the candidate was “from the local area”.

Voters overwhelmingly back the referendum to liberalise Ireland’s divorce laws, the poll finds. Asked if they would vote in favour of the constitutional changes proposed – which would remove the requirement for couples to be living apart for four years (the Government will propose legislation to reduce this to two years) and allow the recognition of foreign divorces, more than three-quarters (77 per cent) of voters say they will vote in favour of change.

Just 8 per cent of voters say they will vote against the proposal, while those who say they don’t know or will not vote account for 15 per cent of respondents. Barring an unprecedented turnaround, the constitutional change will be approved comfortably.