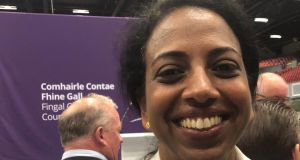 Councillor Punam Rane: “I am coming from a very strong education background and that’s where I feel I can make a difference.”

Fingal’s first Indian-born councillor Punam Rane was amazed at getting elected at the weekend, and equally amazed at the absence of racial abuse on the campaign trail.

The newly elected councillor to the Blanchardstown-Mulhuddart ward said she was happily surprised at the lack of abuse. “People have been very welcoming at the doors everywhere.”

A technology company owner who has lived in Ireland for about 20 years, she used to work in investment banking before she started her software technology business. One of three candidates elected to the five-seater on the last count without reaching the quota, she has big plans, particularly in the education area.

The 49 year old, from Mumbai, is married with a 13-year-old daughter and said her “priority has always been schools, and that’s why I joined Fine Gael for new schools for the ward that I’m going to represent. I am coming from a very strong education background and that’s where I feel I can make a difference. More schools.”

The very mixed electoral area, both middle- and working-class, and with a large international population, includes places such as Tyrellstown where structural faults were found in schools last year.

Asked if she felt being in Taoiseach Leo Varadkar’s Dublin West constituency helped her, she hesitated before saying “in some way yes, but I think I put in lots of effort as well. I got the ground reality, knocking every day for the last six months every door I could think of.

“So I kind of aligned with people’s thought process and I felt the pain and I empathised with difficulties they are going through at this point in time. Every door that I knocked they trusted me that I can deliver what they want so that made a big difference.”