What will the party do if it finds itself as the power broker after general election? 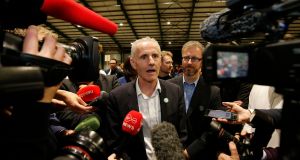 Once the euphoria of this election dies down, particularly around the election of Ciarán Cuffe in Dublin, the Greens will have to face several tricky challenges and risks. Photograph Nick Bradshaw/The Irish Times

And now with the greatest electoral success in its history, could the Green Party have sowed the seeds of its own decline? The history of smaller parties in Ireland suggests the bigger the gain, the greater the potential fall.

Once the euphoria of this election dies down, particularly around the election of Ciarán Cuffe in Dublin, the Greens will have to face several tricky challenges and risks.

The first is how to translate these election results into Dáíl seats?

The second is how to make the gains permanent, by ending the party’s perennial boom-bust cycles?

The third is what to do if the party finds itself as the power-broker after the next general election – does it go into a coalition with one of the big two parties – and risk electoral annihilation – or look to alternatives?

Their challenges are encapsulated by the last line of The Candidate, starring Robert Redford. Having just being elected to the US Senate, Bill McKay turns to his political adviser and asks: “Marvin, what do we do now?”

In the past the Greens were seen as fit for local government and European politics, but not for government. Fingal councillor David Healy says in the 1990s they were seen as unsullied by graft and clientelism. But then when it came to the Dáil, they suddenly became surplus to requirements.

For former leader John Gormley, that’s not the case any more: “The issue of climate change is not going to go away. That’s what has always been there and has ensured the party’s survival.

“I remember in 1989 when Roger Garland got elected he said in his maiden speech: ‘While the Dáil dithers, planet Earth goes down the tubes’.

“That phrase is as relevant now as it was then.”

Unlike other smaller parties that have withered on the vine, the Green Party has survived because its core values have remained consistent.

After the party lost all its seats in 2011, the attendance at its national conventions was reduced to fewer than 200 people. But what was noticeable was that every year there would be a large influx of young members. The fact the party had been wiped out in 2011 was of no import to them. It was all to do with climate change.

Climate change and the environment are now very much in the mainstream of Irish politics, argues party leader Eamon Ryan, who says the party’s surge is more than just a moment. “Look at the impact of the Greta movement [a reference to impact of schoolgirl climate activist, Greta Thunberg] and the climate strikes. There are few people out there who do not recognise the urgency of climate change and what we need to do,” says Ryan.

The so-called Green Wave that has been talked about in the wake of the elections needs to be contextualised. The party did win 49 council seats, three times more than its previous historic high. The national percentage of 5.6 per cent is also a high, but nothing to write home about.

That said the party had no candidates in seven counties and minimal presence in further five. So where the party had a presence its percentage was higher. It stands at 20 per cent in Dún Laoghaire-Rathdown, 15 per cent in Dublin City; 14 per cent in Fingal and 10 per cent in South Dublin. Besides its two Dáíl seats (in Dublin Bay South and Dublin Rathdown), the party is now in the mix in at least 10 other constituencies, mostly in Dublin. It has huge opportunities in Dún Laoghaire, Dublin South West, Dublin Central, Dublin Bay North, Dublin Fingal. Outside the capital, Galway West and Cork South Central are also in the mix, as are Wicklow, Waterford, Kildare North and maybe even Limerick City and Clare.

But winning Dáil seats is never an automatic process. Already, we have seen other parties begin to triangulate and appropriate Green policies and principles as their own.

Gormley points to another salutary lesson from the past: it is that when it comes to the Dáil, ideals alone will never trump boots on the ground.

“You have to cultivate a seat and work hard to make it happen. That takes many years. Look at Trevor Sargent in Dublin North. It was not a natural ‘Green’ constituency but he rolled his sleeves up.

“This is the only tried and trusted method in my own experience.”

On policy issues, Ryan and all his colleagues say the rhetoric of bigger parties is not matched by action. Among the list of unavoidable actions are zero net emissions by 2050; a medium-term ban on fossil fuels; shutting Moneypoint and peat-burning power stations; emphasis on public transport, walking, and cycling; radical changes in agriculture and land use; less meat consumption; afforestation; and dramatic waste reduction.

And from the Green Party’s perspective, all are non-negotiable. Ryan points to the refusal of the Fine Gael Government to stop issuing licences for gas and oil exploration, of Fine Gael and Fianna Fáil coming together to block a move to commit two-thirds of capital spending on transport to public transport rather than roads.

For other Greens, and this is particularly noticeable in the younger generation, the party stands for more than that. They see common cause with other left parties on issues like housing, and wider societal questions such as a market versus circular economy.

“I come from a generation who have no security of employment and no chance of every owning a house,” says Sinéad Mercier, the party’s researcher. “Most people I know are working in the gig economy, or for zero hours, or being worked to the bone with little time off.”

For her, and for others, the issue of climate change cannot be decoupled from wider political questions, and their suspicion of market-led solutions to the problems.

“None of the big parties have signalled any real action,” says newly-elected Dublin councillor Neasa Hourigan.

“It’s all prevarication and talk. They are not really serious. What we proposed on public transport and fossil fuel extraction they rejected.”

This brings us to the problematic question of what role the Green Party can play. It is no secret that Ryan would be keen for the Greens to get back into government, to act as an agent of change. Having brought back the party from zero in 2011 to where it is now, he will carry great sway. Talks are continuing about a left-leaning alliance, but the reality of Irish politics is there can be no government without either Fine Gael or Fianna Fáil involvement.

“I think we would need six TDs before we would think about entering any arrangement,” says Ryan. “It will mean you can cover the Government departments with that number of TDs. Plus you would have two Ministers,” he says.

Since the party’s foundation, there have been periodic tensions between the “fundies” (fundamentalists) and “realos” (realists). It’s not a neat division, but the prospect of coalition government is not everybody’s cup of tea.

“I am not fully agnostic on that question,” says Hourigan. “I was on the housing coalition. Obviously some parties are better than others in my view. I do have preference and do have a particular direction, which would be centre left.”

Another new councillor, Pauline O’Reilly in Galway says that decision will be made by all members.

“It will come down to how can we have that influence. They were things that we achieved when we were in government but did they have a lasting impact?

“What is achievable in a government in which you are the minority? Is it better to be a loud voice and a critical voice outside government and hold the government to account?”

The party’s European election candidate Saoirse McHugh caused a stir when she said she would leave the party if it went into coalition with Fianna Fáil or Fine Gael. She still maintains that stance, but nuances it. And her view has resonance within the party.

“My own opinion is the systemic change that is needed would not be done by Fine Gael or Fianna Fáil, based on their current records.

It’s a quandary for the party. Urgent action is needed now but how is it best achieved, in a government or outside it? Or as part of an as yet unimagined novel arrangement?

Unlike activists from other parties, McHugh and others place its goals above its continuance. Mercier points out the party should exist only as long as the environment is not at the very centre of things. That signals a willingness to go with the most effective solution irrespective of the electoral cost for the party.