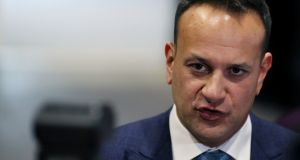 Taoiseach Leo Varadkar: there is “no need for an election” if the Government can continue to get its agenda through the Oireachtas. Photograph: Brian Lawless/PA

Taoiseach Leo Varadkar has said he cannot rule out calling a general election but added it is “not a prospect in the next couple of days or weeks”.

Mr Varadkar, speaking as counts continued in the local and European elections, said there is “no need for an election” if the Government can continue to get its agenda through the Oireachtas.

“This is all about making sure that we have a functioning Government, so as long as the Government can function and function well, we can get our job done and get our agenda through, well then there is no need for an election but if that becomes a problem well then that changes things,” the Taoiseach said.

“I have been asked questions about when the Dáil is going to be dissolved for nearly two years now. At some point, someone is going to have to start believing me.

“My focus is on delivery, getting the job done, keeping the economy strong and making sure people have jobs to go to, more delivery on housing and healthcare and implementing our climate action plan. That is our focus.”

Senior Fine Gael figures stressed there is “really no decision or tendency at this point” on the timing of the general election.

Government sources said the next few weeks would see the publication of Minister of Climate Action Richard Bruton’s All of Government Plan to Tackle Climate Disruption, to be launched within the next fortnight, and the summer economic statement, expected in mid-June.

The Taoiseach said Fianna Fáil leader Micheál Martin had, through the extension of the confidence-and-supply arrangement, agreed to underpin the Government “until Brexit is resolved”.

“But we also need to bear in mind the possibility that Brexit may not be resolved for a very long time. The next deadline is October 31st, who knows if there will be another one?”

Fianna Fáil sources accused Mr Varadkar of “petulance” by stoking election speculation and of trying to distract from the local election results.

Mr Varadkar had earlier on Sunday said Fine Gael was on course for successful European elections but acknowledged its performance in the local elections, particularly in Dublin, had not met expectations.

Meanwhile, Green leader Eamon Ryan said he would seek to work with all parties in local government to promote green and climate-friendly policies and goals.

Although Labour leader Brendan Howlin had said he would meet with Mr Ryan with a view to establish a “civic alliance” between the two parties, Mr Ryan made it clear he expected a broader arrangement involving other parties, including Fine Gael and Fianna Fáil if possible, too. “We shouldn’t exclude any party,” he said.

Speaking about alliances on local authorities, Mr Ryan told The Irish Times he anticipated a “rainbow coalition with a range of different parties”.

Mr Howlin said : “I had very early discussions with the leader of the Green Party, Eamon Ryan, in advance of the election, and I actually spoke to him on polling day as well. I am going to meet him next week to see how we can look at the number of seats we have each and how we can work together to make an impact at local level.”

He said the Labour Party would increase its seats by 25 per cent in the locals but would have liked “a greater pace of increase but that was certainly impacted upon by the volume of Green votes”.

Sinn Féin leader Mary Lou McDonald said the “huge surge” to the Greens “affected everyone and it affected us”.

She added: “Sinn Féin aren’t crybabies. We’ll dust ourselves down and we get back at [it] because that is what political activism is all about.”