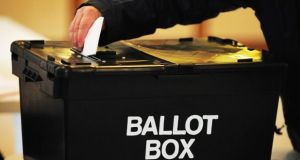 A garda superintendent from outside the Kerry Division has been assigned to investigate the alleged voter registration irregularities. File photograph: Rui Vieira/PA Wire

A full Garda investigation is also underway into allegations surrounding registration forms for the supplementary electoral register and a Garda Superintendent from outside the Kerry Division has been assigned to the matter.

The inquiry centres on the Killarney electoral area, it is understood. The central allegation is that that large numbers of forms, involving up to 200 additional voters, or voters who were changing address, were stamped by a garda in a Garda station without the presence of the voters asking to be registered, as required.

Gsoc said it was aware of the matter. Its investigation is under Section 102 (4) of the Garda Síochána Act, 2005 which means it has opened without a complaint having been made.

Under those provisions, the Garda Ombudsman may if it appears desirable in the public interest and without receiving a complaint, investigate any matter that appears to indicate that a member of the garda may have committed an offence, or behaved in a manner that would justify disciplinary proceedings.

The matter had been raised at the monthly meeting of Kerry County Council on Monday and Garda Commissioner Drew Harris was called on to conduct an “immediate” full investigation into the allegations surrounding registration forms for the supplementary electoral register in Co Kerry.

The supplementary register was revealed to candidates at Wednesday, lunchtime. It contains over 2,700 additional voters. Some 250 applications were rejected by the council, though this was not to do with the current investigation, the council has said.

Candidates have said they fear that a legal challenge will be brought if results are tight.

Meanwhile, politicians across the State issued last-minute appeals on Thursday to the more than 3.3 million voters entitled to go to the polls today, while individual candidates engaged in a flurry of final rounds of canvassing and social media activity.

In recent days the big parties have been seeking to manage expectations of their results, an indication of the unpredictability of elections that are likely to see turnout fall below 50 per cent, observers say.

Turnout at the last local and European elections was just below 52 per cent, but all parties report diminished interest and engagement from voters during the campaign.

Voting began on the offshore islands on Thursday, while most polling stations will open at 7am Friday morning and remain open until 10pm. Counts begin at 9am Saturday morning.