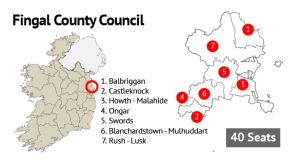 The 49-year-old technology company owner and former investment banker from Mumbai won her seat in Blanchardstown Mulhuddart, bringing the party’s seat total to seven, up from six.

She said “people have been very welcoming at the doors everywhere”. Asked if she felt being in Taoiseach Leo Varadkar’s Dublin West constituency helped her, she said: “in some way yes, but I think I put in lots of effort as well.”

The big winners were the Green Party who have jumped from two to five seats in the 40-seat constituency, including one of the youngest councillors in the country – 20-year-old student Daniel Whooley in Ongar.

Ironically, in the Rush-Lusk horticultural heartland of North Dublin, the party did win but transferred predominantly to the Social Democrats and Labour.

Green party deputy leader Catherine Martin said they would look at that but the overall strength showed that the voters want a better environment and quality of life. “Some tough decision have to be made but the people trust us with that. I don’t think this is something that is going to last only a few weeks. It’s real and households are talking about it with their children.”

But their gains have cost Independents who have plunged from 11 to six seats.

Sinn Fein lost two of their six seats, but averted a disaster in the Dublin Fingal constituency with the retention of Ann Graves’ seat in Swords. She had been ahead of Solidarity councillor Eugene Coppinger by seven votes when he was to be excluded. Following a lengthy recheck there were four votes in the difference and Mr Coppinger, a brother of Dublin West TD Ruth Coppinger, conceded. Solidarity is now down from three to one in Mulhuddart. Ms Coppinger put their poor showing down to the Green surge and a low turnout in working -class areas.

Sinn Féin’s Paul Donnelly topped the poll in the Ongar area, was elected on the first count and exceeded the quota.

A new party councillor and first-time candidate Breda Hanaphy secured a seat in Blanchardstown-Mulhuddart. Treacy Natalie also retained her seat in Castleknock. All three seats are in the Dublin West Dail constituency.

Fianna Fáil have done well in this constituency and increased their seats from six to eight seats, and enough councillors in both the Dublin Fingal and Dublin West Dail constituencies to help in the general election.

Labour has also done well and gained an extra two seats to take six, with four in Dublin Fingal and two in Dublin West.

Robert O’Donoghue who returned to the campaign after open heart surgery, topped the poll in Rush-Lusk. He said that the party had worked hard and the electorate recognised it.