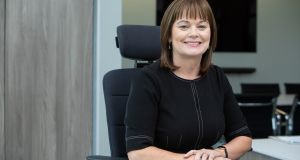 AnnMarie Farrelly will hold the role until a permanent appointment is made by the Public Appointments Service.

AnnMarie Farrelly has been appointed as interim chief executive of Fingal County Council following the departure of Paul Reid to become director general of the Health Service Executive.

Ms Farrelly, who held the role of director of planning and strategic infrastructure, was appointed by the Minister for Local Government Eoghan Murphy.

Ms Farrelly was also Fingal County Council’s director of housing and community from 2011 to 2015, and previously chaired the boards of the Seamus Ennis Arts Centre and the Drinan Enterprise Centre.

She will hold the role until a permanent appointment is made by the Public Appointments Service.

“Quality of life, housing and economic development will remain our key priorities for the county,” Ms Farrelly said, adding that there was a substantial operational and capital works programme to be delivered in 2019.

“I, along with the rest of the management team and staff, will ensure the good work continues to ensure that Fingal is the place of choice in Ireland to live, work, visit and do business.”

Ms Farrelly said she was deeply committed to serving local government and was looking forward to working with the elected members in delivering for the people of Fingal.

“Fingal County Council has a busy period ahead with key projects such as the Our Balbriggan Rejuvenation Plan, Swords Cultural Quarter and Shackleton Gardens to be delivered.

“There are also some major infrastructure projects underway or at planning stage and many of these projects will help activate housing sites in the county.

“The proposed designation of Fingal County Council as the competent authority for aircraft noise will, if enacted, be a new statutory responsibility.”