Elections 2019: Fine Gael took Dublin base for granted in bruising test of Varadkar 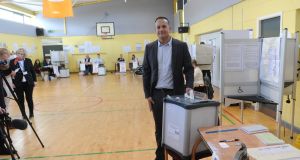 For months, Fine Gael has been looking over its shoulder in worry at rural Ireland.

Its poll ratings, and the personal popularity of Taoiseach Leo Varadkar, outside the greater Dublin area have been a consistent source of anxiety on the Fine Gael benches.

The weeks before polling day saw the Government commit to the €3 billion national broadband plan and provide assistance to beef farmers as it hoped to fend off a poor performance in rural Ireland in the local and European elections.

It now seems, however, that as it faced the country outside the capital, Fine Gael may have taken what it believed to be a solid support base in Dublin for granted. Opinion polls regularly put the party in the mid 30s in Dublin yet the RTÉ exit poll - which has a margin of error of 3 per cent - had Fine Gael on 15 per cent, just one per cent ahead of Fianna Fáil on 14 per cent.

The Green Party has, on a massive scale, taken Fine Gael’s urban support base and is predicted to be the largest party in Dublin in the local elections, with the exit poll putting it on 18 per cent in the capital.

If reflected when final counts are complete, that result will send shudders down Fine Gael spines. Its Dublin “firewall” - which some party figures believed could be counted on to stick with Fine Gael if rural Ireland did not - has crumbled because of a flight to the Greens.

Green candidates were polling above 20 per cent in many electoral wards, such as in Blackrock in Dún Laoghaire, where according to tallies, Séafra Ó Faoláin is in line to take 24.25 per cent first preference votes. Fine Gael had hoped to take three out of six seats in this electoral ward, but the Green wave has scotched such ambitious hopes.

Housing, the Government’s control of the public finances and, in the final week of the campaign, the controversy surrounding party TD Maria Bailey’s personal injuries case against a hotel seem to have damaged Fine Gael.

There is widespread anger within Fine Gael at Bailey, with small business owners struggling with rising insurance costs expressing their anger to TDs and councillors all across the country.

The root causes of this poor performance are likely to be deeper, however. Those within the party accept that the Fine Gael reputation for responsible budgeting has taken a hit in the controversies over the national broadband plan and the children’s hospital.

Some, but not all, comforted themselves these voters - many traditionally inclined towards Fine Gael - had nowhere else to go, yet Eamon Ryan gave them a warm welcome.

Those who opted for the Greens may also be dissatisfied with the Government’s progress on green issues such as public transport, urban planning, pollution and biodiversity.

Despite much promise, we have yet to see any firm action from Varadkar’s government on climate change, although a plan of action is promised in the weeks ahead. The Government had already intended to launch its “All of Government Plan to Tackle Climate Disruption” after the local elections, but it may now - to the public - seem like a reaction to the Greens’ success.

Fine Gael’s initial ambition to replace Fianna Fáil as the largest party in local government gave way a few weeks ago to a goal to instead gain seats, but still fall short of Micheál Martin’s tally.

That Fine Gael is now trying to claim that holding its outgoing number of council seats - it won 235 in 2014, losing 105 seats five years ago in a campaign dominated by water charges - is a measure of how bad the local election results are shaping up to be.

Varadkar may hold its four European Parliament seats - by gaining one in Midlands North West but losing one in south - but the council elections will cast a huge shadow over the Taoiseach and his party.

There are no areas in which Fine Gael can rely on a safe level of support, and Fine Gael leaning voters have shown they do have alternatives.

The Taoiseach was elected leader of his party in the hope that he would lead Fine Gael to greater electoral success but his first test has been a bruising one.

Idle talk of a general election will surely give way to a demand from his TDs for Varadkar to refocus his efforts to win back voters who have deserted Fine Gael for the Greens.

These are second order elections, after all, and it will be a huge task for the Greens to replicate this performance at a general election.

To recover, Varadkar must show voters he has heard what they have told him today.