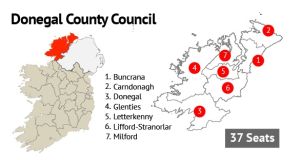 He led Donegal to their first All Ireland in 1992.

And now he has helped Fianna Fáil to a seat on Donegal County Council. All-Ireland winning GAA captain Anthony Molloy won a seat for Fianna Fáil in the Glenties Electoral area.

In the same constituency, the outgoing Cathaoirleach of Donegal County Council, Seamus O'Domhnaill lost his seat for Fianna Fáil.

It was a strong performance by Fianna Fáil, taking 12 seats as Sinn Féin took 10 seats.

The Independent politician was embroiled in controversy after the Standards in Public Office found against him following an RTÉ Investigates programme.

Councillor O’Donnell was filmed for the programme holding discussions with an undercover reporter claiming to be a wind farm investor.

When he asked by the “reporter” if he could help with the zoning of land, he said he could “lobby the other councillors to be more supportive of wind farm development”.

However, councillor O’Donnell said he was entrapped by the reporter. He was recently censored by Donegal County Council after 20 county councillors attended a specially-convened meeting of the council to discuss the SIPO findings. The council did not have the power to expel Councillor O’Donnell but it did stop him from addressing the council and also prevented him from sitting on any committees apart from one.

He was recently approached by RTÉ again to give an interview, but he refused to speak saying the people would decide his future on May 24th.

Cllr O’Donnell received a loud cheer when he arrived at the Aura Leisure Centre in Letterkenny on Saturday after being returned to Donegal County Council. Among the first to greet Mr O’Donnell was his mother Ann.

“The people have spoken and I’m delighted with the outcome,” he said. “It’s an absolutely resounding victory. There is a lot of joy and it’s very emotional. I always said that I’d let the people of Milford decide and let them speak.”