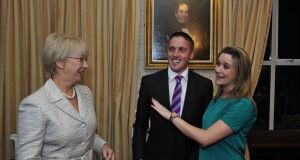 Dún Laoghaire-Rathdown has become the first ever local authority in the State to have a 50-50 split of men and women, but less than a quarter of councillors elected nationwide look set to be female.

Of the 913 seats filled from the total of 949 at the time of writing, 697 were filled by men, compared with 216 by women. That amounts to 76.3 per cent of local representation being male.

In terms of this election’s results, parties traditionally considered left wing performed strongest in terms of the male-female ratio of elected councillors, although these parties lagged behind in terms of the overall numbers of candidates that got elected.

For example, more than 63 per cent of elected councillors with Solidarity/People before Profit were women, but these amounted to just seven out of 11 individuals.

The only other party to have more women elected than men was the Social Democrats, at almost 53 per cent. However, this amounted to just nine women compared with eight men.

In terms of parties that made it into double figures, Labour had 23 women and 32 men elected, which worked out at 41.8 per cent women.

Elsewhere, the Green Party had 20 women elected compared with 28 men, or 42 per cent. The party with the next best percentile was Fine Gael, where 57 of its 237 candidates were women. That amounted to 23.8 per cent.

The worst-performing category were the Independents, with 34 female candidates elected, which was 17.7 per cent of the total in that category.

National Women’s Council of Ireland director Orla O’Connor welcomed the increase in women getting elected but said it was “still nothing like it should be”.

“We are seeing some local areas where there are really low representations of women,” she said. “We wanted the Government to bring in a quota for the local elections and the results bear that out.

“Women will vote for women, so it’s important we get that equal representation on the ballot paper, and we’re a long way off from that.

“Fianna Fáil and Fine Gael didn’t reach the target of having at least 30 per cent of the candidates running being female. The two largest parties really need to look at their internal structure to see why they couldn’t do that.

“Things are going in the right direction in Ireland, but they’re very slow. That’s part of the issue. It’s the pace of the change, but we can do things to increase the pace of that change.”