Poor results for Solidarity - People Before Profit and Sinn Féin 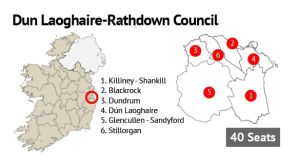 The big story in Dún Laoghaire-Rathdown - as with elsewhere across the State - was the remarkable success of the Green Party whose candidates either toped the poll or were elected on the first count in all five of the Local Electoral Areas (LEA) where they put a candidate forward.

So emphatic was the breakthrough that the party may well be ruing not putting more candidates into the field in those LEAs.

The party easily topped the poll in Dundrum, Blackrock and Dún Laoghaire, with all three of their candidates in those LEAs elected on the first count and all with substantial surpluses to spare.

Daniel Dunne was the first the party member home safe and he was quickly followed by Séafra Ó’Faoláin in Blackrock and by Ossian Smyth in Dun Laoghaire. Una Power from Kiliney-Shankill joined her Green colleagues shortly later as did Deirdre Ni Fhlionn in Glencullen-Sandyford.

As she watched the results coming in the Green Party’s deputy leader Catherine Martin said the party’s breakthrough in the Local Elections was “beyond our wildest expectations” although she did ad that her extensive canvassing in the weeks leading up to the vote had convinced her the party would do well.

She said that she had repeatedly heard people on the doorsteps saying the climate crisis and the need for action was becoming the single most important deciding factor in how they were planning to vote and she added that she was looking forward to a meeting of all the new Green Party councillors next week.

It was a bad day at the office for left wing parties with both Solidarity People Before Profit and Sinn Féin suffering losses. Richard Boyd Barrett blamed a poor turnout in traditionally strong PBB areas and suggested that a disappointing election for left-wing parties was down to demoralised voters.

Fianna Fáil councillor and former cabinet minister Mary Hanafin has said the Government will have little choice but to call a general election this year, rather than weaken its positions by allowing a series of potentially damaging by-elections take place before going to the country next year.

“It has to be this year,” she told The Irish Times. “The Government does not have time on its hands because of the by-elections and why would its wait for those to happen with all the potential they will have for a protest vote that would weaken its position.”

Ms Hanafin, who was elected on the first count in the Blackrock Local Election Area of Dún Laoghaire Rathdown said the significant things about the local elections in her area was the “complete wipeout of Sinn Fein” and the loss of one of the People Before Profit seats.

Fine Gael held its own with one of the more notable success coming from Bangladeshi-born MBA graduate Kazi Ahmed who campaigned for six hours a day while fasting for Ramadan before being elected as a councillor for Gleccullen-Sandyford on his first time of asking.