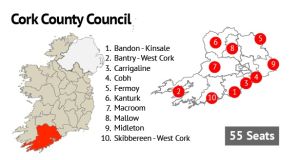 The 29-year-old pipped Independent candidate Finbarr Harrington by just one vote, flipping the outcome of Sunday night’s first full count when the latter had been deemed elected by the same margin.

McKeever Cairns, a farmer and businesswoman, called for the first recount which carried across Monday and into Tuesday morning. Following extensive discussions over doubtful ballots, it emerged five invalid votes had been included in the first full count.

With those removed, it changed the landscape significantly, with the quota reduced by one in the four-seat LEA. The result of the first recount put McKeever Cairns, supported by Social Democrats joint leader Roisin Shortall, one ahead, gaining two votes in the recount while Harrington’s total remained the same.

Harrington, a longtime community activist, called for the second recount. While it proceeded swiftly, concluding before 5pm, it all came down to 22 doubtful papers. In an enthralling development, the tension was ratcheted up as those papers were combed through, one-by-one, like a high-stakes game of Snap, at a table around which the two candidates, their representatives, and the Returning Officer Maurice Manning and his team explained the reasoning behind the decision made on each one. This gripping spectacle was played out as supporters of both candidates watched on, hanging on every word.

Shortly before 9pm, the announcement came, but Harrington had already conceded defeat in magnanimous fashion, calling McKeever Cairns a “wonderful person”, someone who he said had similar beliefs to his own. “Tonight it’s all about Holly,” he said.

Deputy Shortall said of the count process: “It was by far the tightest battle that I have ever witnessed. There was one vote in it. It just shows how well the system works.”

She said the win was significant for the party, which has trebled its number of councillors nationally, adding: “People like Holly McKeever are the future of Irish politics.”

The winning candidate paid tribute to Mr Harrington and his family, outlining how she has “many aspirations” for her time on Cork County Council, including making West Cork a place where people stay and return to. “I never expected this turn of events,” she said of the count. As for the roundtable discussion on the doubtful ballots in the second recount, she said: “I always felt calm. I’m not sure if later on tonight or next week I will realise what happened.”

Sunday’s first full count had given her the third highest number of first preferences in a crowded field, only for victory to appear whipped away at the last. Yet 48 hours later, it was her hour, and her seat.

Following the mammoth count process, she summed it up: “It shows the importance of getting out to vote. Literally, every single vote counts.”

Danny Collins (Ind) followed in the footsteps of his TD brother Michael by being elected on the first count with a massive first preference haul. It was the sixth count before he was joined by Fianna Fáil’s Patrick Gerard Murphy, with Katie Murphy - at 20 the youngest candidate across the whole West Cork area - elected on the seventh count.

In Bandon-Kinsale, Alan Coleman (Ind) was again elected on the first count, but whereas in 2014 it was behind Rachel McCarthy of Sinn Féin, this time he was behind poll-topper Gillian Coughlan of Fianna Fáil. The Sinn Féin vote here collapsed and there were three Fine Gael candidates returned - Kevin Murphy, John O’Sullivan and Marie O’Sullivan, all without reaching the quota - and Seán O’Donovan of Fianna Fáil.

In neighbouring Skibbereen-West Cork, Fianna Fáil’s Christopher O’Sullivan wants a shot at winning a seat in Dáil Eireann, claiming his poll-topping performance means he should be considered on any party ticket.

The Clonakilty-based councillor was elected on the first count alongside his party colleague Joe Carroll. The drama here was the tussle between Paul Hayes of Sinn Féin and Fine Gael newcomer JJ Walsh. Mr Walsh pointed out that due to boundary changes, neither man could vote for themselves.

Independent Declan Walsh was returned on the ninth count, with Karen Coakley of Fine Gael elected on the 10th count alongside Mr Hayes. Mr

Walsh, recently retired, took it on the chin.

Psychologist Liam Quaide (Green Party) edged out Fianna Fáil’s Rosarii Griffin to take the seventh and final seat in the Midleton local election area on the 10th count. He admitted he was “somewhat surprised” having run a “limited campaign” but was nevertheless thrilled with the outcome.

Ms Griffin had been aiming to win a second seat for her party in the reconfigured local election area, which increased from six to seven seats. Five councillors who sought re-election were all returned to County Hall.

Fianna Fáil’s Michael Aherne did not seek re-election but newcomer James O’Connor (21), the youngest candidate in the field, secured a seat on the sixth count. The second-year business and economics student at Trinity College Dublin indicated that his “top priority” was serving the electorate. He said he would “rearrange” his college schedule as a result of his election.

In Carrigaline, 19-year-old university student Ben Dalton-O’Sullivan was elected along with Liam O’Connor of Fine Gael and Audrey Buckley of Fianna Fáil on the seventh count without reaching the quota.

Fianna Fáil’s Seamus McGrath scooped 4,247 votes - one of the highest totals in the country - and was elected on the first count with Marcia D’Alton (Independent) and Aidan Lombard of Fine Gael.

The story of the election in North Cork was Fianna Fáil’s vote management. All of the party’s seven candidates across the Fermoy, Kanturk and Mallow electoral areas were elected on the first count — including a hat-trick in Fermoy.

It was a bad day at the office for Sinn Féin, whose sitting councillor Melissa Mullane lost her seat in Mallow. The party’s candidate in Fermoy, Helen White, was the first to be eliminated in that contest.

In Fermoy, Noel McCarthy of Fine Gael comfortably topped the poll with half a quota to spare, joined by the Fianna Fáil trio of Frank O’Flynn, Deirdre O’Brien and William O’Leary.

Fine Gael’s Kay Dawson took the fifth seat on the third count, and the transfers over the subsequent five counts were not enough for the chasing pack of sitting Social Democrat candidate June Murphy, Labour member David Kenneally or Ms White to catch Frank Roche (Independent), who took the last seat on the eighth count.

In Cobh, Padraig O’Sullivan of Fianna Fáil and Fine Gael’s Anthony Barry were elected on the first count. Sinéad Sheppard of Fine Gael won a seat on the third count and was followed by Cathal Rasmussen (Labour) on the sixth. Alan O’Connor of the Green Party and Sean O’Connor (Independent) took the last two seats.