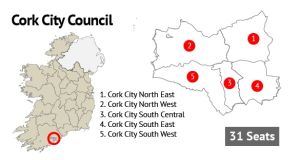 The last two seats on Cork City Council were filled on Monday evening following the conclusion of a recount in the city’s south central local authority area (LEA).

Independent councillor Paudie Dineen and Sinn Féin councillor Fiona Kerins were re-elected, with just a single vote separating them after an 11-hour recount. The recount was requested late on Sunday night by Sinn Féin after just 12 votes separated Ms Kerins, the party’s county councillor, Eoghan Jeffers, and Mr Dineen after the 11th count. At 7pm on Monday evening, the state of poll after count 12 showed just nine votes between them.

Her election secured a fourth seat for Sinn Féin on the council – down from eight. Ms Kerins said: “We didn’t want to be in this place, standing against each other but the main thing is we took a seat for Sinn Féin in south central.”

Mr Jeffers said while he was disappointed, the most important was to see a colleague elected. The conclusion of the recount and the formal closure of the count at City Hall means that despite losing two seats over the weekend, Fianna Fáil has retained its position as the largest party on the 31-seat council, while Fine Gael has gained two seats to seven. The first meeting of the new council is on June 7th.