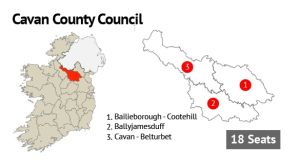 Sinn Féin is breathing a sign of relief in Cavan after its last remaining candidate in the race nicked the last seat on the county council. The party has gone from having four seats to just one in the biggest shock of the local election in a Border county.

Sitting councillor Paddy McDonald took the final seat in the Bailieborough Cootehill area without reaching the quota, thanks to transfers from his running-mate Bridget Boyle.

Earlier in the day it looked as though Sinn Féin was facing total wipeout in the Breffni county with three sitting councillors losing their seats: Damien Brady and Daniel Downey in Cavan Belturbet; and Noel Connell in the Ballyjamesduff area.

Aontú’s Sarah O’Reilly was another big story from the election in Cavan- topping the poll in the Bailieborough Cootehill area with over 1,700 first preferences to take the first seat there.

Party leader Peadar Tóibín travelled from Navan to celebrate with her on Saturday evening. Sitting councillor Sarah O’Reilly, who was co-opted on to the seat vacated by Fianna Fáil Deputy Niamh Smyth following the last General Election, had resigned from the Fianna Fáil party.

The first candidate to take a seat just before midnight on Saturday was Fianna Fáil’s John Paul Feeley in Cavan-Belturbet with more than 1,400 first preferences. It was a bitter-sweet moment for the young solicitor who retained his father’s council seat in 2014. The late Eddie Feeley passed away in 2016.

“Personally, I’m delighted to be back on the council. I’m thankful for the votes I’ve received, and particular happy about fact that Fianna Fáil will be very much in the driving seat on the next council. That’s down to a massive effort by all of our candidates - those who got elected and those who didn’t,” he said.

“Five years ago, my father was here. He’s obviously the reason I got involved in politics, it was emotional very much so. During the course of the campaign, your thoughts wouldn’t stray very far from him,” said Cllr Feeley, thanking his mum Patsy and his family for their support.

The young Blacklion man was reluctant to comment on Sinn Féin’s demise in the county – except to say the extent of it was a “surprise”.

The writing was on the wall for Sinn Féin early on Saturday as tallies showed its two-candidate strategy in each electoral area had split their vote too evenly.

Sinn Féin director of elections for the county, Pauline Tully, was relieved for Mr McDonald but admitted the party never anticipated losing three of its four seats. She said that they will “regroup and rebuild” and be back stronger than ever.

Meanwhile, also in the Cavan Belturbet area, Independent candidate Brendan Fay from Belturbet took a seat. The popular publican campaigned largely against two proposed secondary school closures and is thought to have picked up a large number of votes off the back of that.

There were many highs and lows in the count centre over the weekend, particularly for Fianna Fáil candidates. Patricia Walsh reclaimed the seat for Fianna Fáil she lost in 2014 in Cavan; while Craig Lovett, who won a third seat for Fianna Fáil in Ballyjamesduff, celebrated by jiving with his partner Mairead Gaffney - both TV advert stars for Lidl.