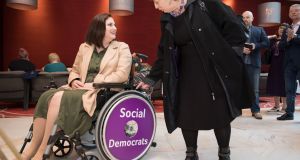 More disabled councillors could be elected to local authorities if the Government followed the UK’s example and introduced a grant scheme to support candidates with disabilities, a local election candidate has said.

Skibbereen West Cork candidate Evie Nevin called for the Government to introduce a pilot scheme to tackle under representation of people with disabilities at council level.

Ms Nevin, a journalist and campaigner on disability rights, said such a scheme would not be about giving anyone an unfair advantage but to create a level playing field for candidates with disabilities.

She said it could cover campaign-related expenses like specialist transport or taxi fares, screen reader software, sign language interpretation, transcriptions for Braille, assistive technology and a personal assistant. The fund would not cover campaign costs.

The Social Democrats candidate said the UK held its local elections earlier this month and a £250,000 (€284,000) fund to cover additional financial costs, helped 60 local election candidates with disabilities and 20 were elected. The British scheme originally started out as a pilot project for the 2014 elections.

She uses a cane to help mobility but in the last five years has had to start using a wheelchair frequently because of the potential for injury, including hip dislocation, pulling muscles and tendons.

She made the call for a fund as the Social Democrats launched their local election disability manifesto in Dun Laoghaire on Sunday, which includes a commitment that a minimum of 7 per cent of new social housing will be fully wheelchair accessible; expanding the number of playgrounds, pools, gyms, parks and green spaces and venues designed with full accessibility; and ensuring that all future community projects have fully accessible changing facilities.

The party’s joint leader Catherine Murphy said “accessibility should be a given in our local plans, services and amenities, but this is just not the case. We want to put a renewed emphasis on this issue.”

Dun Laoghaire local election candidate Dave Quinn, a board member of Inclusion Ireland and the father of a young adult with a disability, said €34 million was spent on the town’s Lexicon public library “but it doesn’t cater for the needs of people with physical disabilities such as spinal injuries, muscular dystrophy and multiple sclerosis”.

He said €10 million is to be spent on Dun Laoghaire public baths and the local authority now has an opportunity to make them fully accessible.

Ms Nevin said that as a wheelchair user “I know first-hand how councils have neglected to put in place even the most rudimentary of supports to help integrate people with physical difficulties.

The Clonakilty-based candidate has a son aged nine and daughter aged four, both of whom have inherited her condition.

“I don’t want them to feel an afterthought like I have as somebody with a disability.”