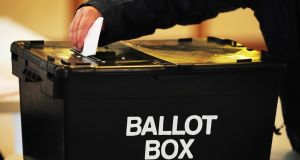 Fingal county councillors are objecting to ballot papers being “shunted around like shuttlecocks” outside its jurisdiction in this week’s elections over fears of potential vote-rigging or lost ballots.

Several councillors have condemned plans for all referendum, local and European election votes on May 24th to be moved together to Dublin’s RDS, before local votes from Fingal, Dún Laoghaire-Rathdown and South Dublin are separated out and transported on to Citywest for counting.

Mayor of Fingal Anthony Lavin wrote to the county sheriff Fergus Gallagher – who is responsible for election counts in Dublin – in recent weeks to oppose the proposals and demand alternative arrangements.

“I received a letter back and the decision remains as it is,” said Mr Lavin.

“It says there will be no change, they are not in a position to do as we, the council, have requested. I’m disappointed. We would prefer if this was all happening in Fingal, from a security point of view.

“This makes it more likely that something will go wrong, that votes go astray. When we have two locations that the votes have to go to, it just increases the potential for something going wrong.”

He said it all added to “the potential for human error”.

“It would make a lot more sense if we could keep them locally in Fingal, bring them to one count centre, like has happened in the past.”

At a council meeting, Independent councillor Cathal Boland said it was “very wrong” that European Parliament votes were “taking precedence” over local votes.

“The idea that ballot papers of local elections are going to be shunted around like shuttlecocks is just not good enough,” he said.

“Local elections are about local people and they should be able to see the process in operation.”

Labour’s Brian McDonagh said it was vitally important for democracy that sealed ballot boxes are witnessed being opened at local count centres and cautioned that the proposed transportation introduced “a vulnerability in the electoral system where extra ballots can be put in”.

“This is wrong, on a basically democratic level. They have made an arse of it,” he said.

Councillor Howard Mahony of Fianna Fáil, shared the concerns, adding that it “beggars belief as to what they are doing”.

“Ten years ago it was all done here in Swords,”he said.

Independent Anne Devitt said the planned movement of votes was an “insult” to county councils “by piling us into Citywest with all the complications of getting out there”.

“It is not democratic, it does not reflect what local elections are about,” she said.

Fianna Fáil’s Darragh Butler added that it was “vital for our democracy” to see local votes being counted locally and warned the plans set a “very dangerous precedent” for election counts.

John Quinlivan, Fingal’s director of corporate affairs and governance, told councillors that the transportation and counting of ballots is “ultimately a decision for the county sheriff”.