Aontú making a place for itself in Irish politics, says Tóibín 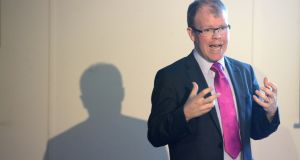 The Aontú political party is ‘operating on fresh air’ but is already making a place for itself in Irish politics, its founder Peadar Tóibín TD has said. Photograph: Dara Mac Dónaill

The Aontú political party is “operating on fresh air” but is already making a place for itself in Irish politics, its founder Peadar Tóibín TD has said.

Speaking in Dublin at the launch of Aontú’s local election manifesto, which was attended by many of the party’s 53 candidates, Mr Tóibín hailed the party’s performance in the recent elections in Northern Ireland, where he said Aontú took 7 per cent of the vote in constituencies where it stood a candidate.

Mr Tóibín, who left Sinn Féin having been disciplined over his opposition to abortion, added that the party was seeing many new supporters coming from a unionist background in the North.

“There is a space between what people think and what they’re willing to say in the public space,” he said, adding that there was room in this space for his party to grow.

“What does Fine Gael have to do before Micheál Martin is willing to hold them to account?” Mr Tóibín asked. “If you vote Fianna Fáil, you get Fine Gael, it’s as clear as that.”

He said Sinn Féin was distracted by the “culture wars” and had forgotten its core values of Irish unity and economic justice. He condemned the Sinn Féin leadership for travelling to London to ask the British government to legislate for abortion and same-sex marriage in Northern Ireland, which he called “a massive break from the idea of self-determination”.

“For 200 years, Irish Republicans have been going to London and telling London to stop legislating for Ireland,” he said.

The Aontú manifesto deals with many issues, though few feature specific or costed plans, and has three themes — life, unity and economic justice.

Mr Tóibín said that recent figures showed there would be more than 11,000 Irish abortions this year “between procedures carried out here and in the UK”.

He compared this to the number of abortions last year (3,200) and said that as “a direct result of the legislation, the abortion rate has tripled”.

Asked about his party’s stance on immigration, Mr Tóibín said he believed that immigration was a normal part of a functioning society. However, he said there “should not be orthodoxy and uniformity in public debate” and that “people are entitled to discuss the issue of immigration as long as it’s reasonable and respectful”.

“We believe that people coming from war-torn areas, coming from famine or violence are refugees that we, in accordance with international law have a human obligation to offer these individuals safety and sanctuary in this country,” he said.

“Yes, there are serious difficulties with regard to resources in housing, healthcare and education. None of those difficulties are the fault of migrants in any way. They are fully the fault of the Government . . . and that’s a very important distinction.”