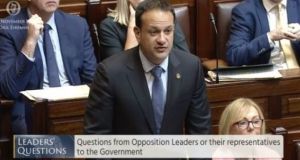 Taoiseach Leo Varadkar has rejected claims of inappropriate behaviour following a meeting between one of his advisors and a former government press secretary lobbying for exploration companies.

Mr Varadkar was responding after heated exchanges in the Dáil when Leas Cheann Comhairle Pat ‘The Cope’ Gallagher called on People Before Profit TD Bríd Smith to withdraw claims the Taoiseach was involved in “deliberate lying” over the Government’s commitment to climate action.

Ms Smith had hit out at the refusal by the Government to allow her climate action Bill proceed through the Oireachtas. It would would ban any more oil and gas exploration in Irish waters.

The Climate Emergency Bill was rejected on the grounds that it required a “money message” which would have involved a cost to the exchequer.

Mr Varadkar said the decision to disallow Ms Smith’s Bill was made by the Ceann Comhairle and not the Government because it involved spending public money.

Ms Smith pointed out that the Bill had been overwhelmingly accepted in two Oireachtas votes.

She claimed the Taoiseach told “deliberate lies” to students about his commitment to act on climate change.

Mr Gallagher insisted Ms Smith withdraw her allegations, and there were heated exchanges before she withdrew the allegation and said the Taoiseach told “deliberate untruths”. She amended it to “untruths” when the Leas Cheann Comhairle insisted the word “deliberate” be withdrawn.

Ms Smith asked about a meeting between one of the Taoiseach’s key advisers John Carroll and the former Fine Gael government press secretary Fergal Purcell. The Taoiseach said they met for coffee and then Mr Purcell raised Ms Smith’s Bill and the possibility of a ban on offshore oil and gas exploration. Mr Varadkar said the official did not know Mr Purcell would raise the issue.

The Dublin South-Central TD said that, following remarks by the Taoiseach, Mr Purcell’s account of the meeting was “either wrong or untrue”. Mr Purcell had registered the meeting as a lobbying meeting, but the Taoiseach’s adviser had made no record of the encounter.

“That’s not a cup of coffee. He registered it on the register of lobbying because he saw it as lobbying. Why did your office not see it as lobbying?” Ms Smith asked.

“Clearly somebody is telling something that’s not correct,” she said.

But the Taoiseach said his adviser did not make a record as the meeting was held outside Government buildings, and he added that the obligation to report lobbying is on the lobbyist, not on the person being lobbied.

The official had met the former government press secretary on May 2nd for coffee, Mr Varadkar said.

“I don’t know how long it lasted, or what it cost, or who paid for the coffee,” the Taoiseach added.

Every politician is lobbied in various forms nearly every day, he said.

Mr Varadkar added the Government rejected a ban on gas and oil exploration because it was not part of the Paris Agreement on climate change, it created a risk to the supply of energy in the State and it would cost jobs in the sector.