Legislation on school and hospital staff to be amended 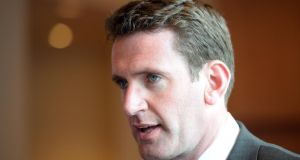 Minister of State at the Department of Justice and Equality Aodhán Ó Ríordáin: “So while we rightly celebrate marriage equality, there is still some uncertainty and a certain chill factor with gay and lesbian people, especially in schools.” Photograph: Eric Luke

Legislation to prevent schools and hospitals discriminating against current or future employees because of their sexuality will be in place by summer.

Minister of State for Equality Aodhán Ó Ríordáin said he is working hard to ensure the Employment Equality Act will be amended by September, when the new school term starts.

“Recently the Irish National Teachers’ Organisation had an event in Áras an Uachtaráin where they met President Michael D Higgins. A number of people stepped out of the picture with the President because they were worried at being identified as gay teachers. They fear it would impact on their employment prospects or felt it might go against them in their workplace.

“So while we rightly celebrate marriage equality, there is still some uncertainty and a certain chill factor with gay and lesbian people, especially in schools.”

The Act allows religious-run schools and hospitals to discriminate against employees or prospective employees whose sexuality or family status is not perceived as conforming with the religious ethos of the institution.

“The celebrations are justified but they are tempered with the realisation that, for most teachers, there is still a reluctance to be open about their lives and their sexual orientation.”

Following the Yes vote in the same-sex marriage referendum, the Constitution will formally be amended next week when Mr Higgins is expected to sign the marriage equality Bill into law.

To give practical effect to the amendment, the Oireachtas will enact the marriage Bill 2015, which will state in law the principle that being of the same sex is no longer an impediment to marriage.

Officials in the department will begin drafting the legislation this week. A spokesman said the Bill would be prioritised with a view to it being passed by the Oireachtas before the summer recess.

A three-month notice period is required for all civil marriages, but the legislation will specify that current civil partners may marry without giving the notice period. Couples who wish to have their marriages from other countries recognised in Ireland will be allowed to do so as soon as the law comes into effect.

Some legal sources suggest that, after Mr Higgins signs the Bill that changes the Constitution, a same-sex couple could go to the courts to claim the right to be married immediately.

When the marriage Act is in force, two people getting married will declare that they accept each other as “husband and wife” or as “spouses of each other”. It will also state that a change of gender will have no effect on marriage.