Legal question over €1.6m left in will to Sinn Féin

Will leaves money to party in Republic, where donations are limited to €2,500 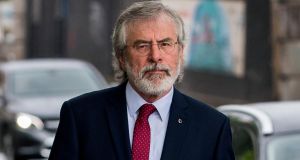 The will in which the late William Hampton left Sinn Féin more than €1.6 million is very clear and leaves the money to the party in the Republic of Ireland, according to a review of the will by an expert in probate law.

Sinn Féin has declared the money was received by the party in the North of Ireland, but this is not in accordance with the will, according to the expert, who did not wish to be identified.

The law in the Republic prohibits political parties from accepting more than €2,500 from an individual donor in any one year, and the donor, if an individual, has to be an Irish citizen.

The key line in the document signed by Hampton, in a solicitor’s offices in Cootehill, Co Cavan, in 1997, says that he is leaving the money to the “political party in the Republic of Ireland known at this time as Sinn Féin”.

Earlier in the document the UK citizen willed a few thousand pounds to a number of named parties. He then stated that the residue should go to Sinn Féin. There is nothing in the document to indicate the huge size of the “residue”.

Further parts of the will are concerned with ensuring that there is no confusion about which Sinn Féin the money is to go to. It says it is the party that Gerry Adams belongs to, and is not the group known as Republican Sinn Féin. There are also further stipulations, to cover the possibility that Adams might pre-decease Hampton, or that there might be a split in Sinn Féin.

However, according to the expert, these elements of the will are not relevant as the Sinn Féin identified in the will was still intact at the time of Hampton’s death. “The will is clear. The identity of the beneficiary is Sinn Féin in the Republic.”

If the expert is right, then the will left the money, the largest single donation ever given to an Irish political party, to an entity which is forbidden by law from accepting it.

Sinn Féin, or rather the executor of Hampton’s will – the Sinn Féin director of finance, Des Mackin – took the view that it was, in the circumstances, allowable that the money could go to the party in the North, where there is no limit on the amount that a party can receive.

However, the expert who shared his opinion with The Irish Times took a different view.

“It is not possible for a beneficiary to disclaim in favour of another beneficiary, person or entity,” the expert said.

“But the entity to object or take action would be Sinn Féin in the Republic and presumably that is unlikely.”

In the circumstances, he believed, the money could go to Hampton’s next of kin, on the basis that, legally, the money cannot go to Sinn Féin.

It is understood that Hampton has a surviving niece. Efforts by The Irish Times to contact her have, to date, been unsuccessful.

Hampton, a native of Fenstanton, England, died in a nursing home in Wales in 2018. He and his late sister had inherited a substantial amount from the estate of their father, a farmer and land owner in Fenstanton. It is not clear why Hampton, who was known to be eccentric and describes himself as of no fixed abode in his will, left the money to Sinn Féin.

The Labour Party has written to the Standards in Public Office Commission about the bequest. In its letter the party pointed out that the will said the money was to go to Sinn Féin in the Republic and was therefore, on the face of it, a prohibited donation.

“I am fully confident that, as the body charged with oversight of ethics and electoral legislation, your commission will be anxious to ensure that relevant Irish legislation is upheld and not sidestepped,” the letter said.

“In order to do so, it may be that it will prove necessary to bring the status of this gift in Irish law to the attention of the English authorities.” The party has been told the letter will be considered by the commission.

Labour leader Brendan Howlin has called on Sinn Féin to donate the money to charity. “This donation is more than 600 times the maximum allowed donation in the Republic of Ireland. We have these laws for a reason.”

Sinn Féin is a very wealthy party relative to its size. It collects large amounts of money in the United States and elsewhere, which is used to support the party in the North but which it is prohibited by law from using in the Republic.

The party’s latest accounts in the Republic show income in 2017 of €3.7 million, the bulk of it from the State. It owns two properties on Parnell Square, and two on the Falls Road in Belfast, with a total value of €1.7 million.

The party was asked on Tuesday for a response to the expert’s view on the Hampton will, but had not responded by Thursday.