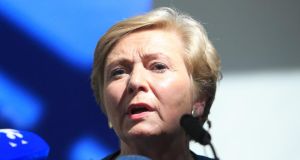 The latest investigation into allegations of Garda misconduct comes on foot of a recommendation to Cabinet from Minister for Justice Frances Fitzgerald. Photograph: Gareth Chaney/Collins

The Government has decided to hire seven barristers to examine as many as 220 outstanding allegations of Garda misconduct received from members of the public in light of the whistleblowers affair.

The move came as the Government approved terms for draft laws to strengthen the Garda Síochána Ombudsman Commission with new powers, including the right to investigate any alleged criminal conduct by a Garda commissioner.

In respect of some 220 allegations about members of the force, Attorney General Máire Whelan will engage a panel of two senior counsel and five junior counsel to scrutinise files and advise whether further action is required. The latest investigation comes on foot of a recommendation to Cabinet from Minister for Justice Frances Fitzgerald.

It follows the Guerin report into misconduct claims made by Sgt Maurice McCabe, the Cooke report on claims the GSOC headquarters were bugged, the establishment of the Fennelly commission to examine covert recording of phone calls in some Garda stations and an assortment of inquiries into the penalty points controversy. At issue is a deluge of allegations received from the public by Taoiseach Enda Kenny, Ministers, TDs and Government departments.

Each complainant will be contacted and offered access to the barristers, who must complete their work within eight or 10 weeks. “Members of the panel will examine the papers on each case and make recommendations to the Minister on whether further action is needed, such as referral to GSOC,” said the Department of Justice.

Separately, the Cabinet resolved yesterday to give the Minister the right to refer alleged criminal or other serious misconduct on the part of a Garda commissioner to GSOC. The commission could also examine such matters on its own initiative.

“However, the conduct that may be investigated under the new arrangements will not include the exercise of the general direction and control functions of the commissioner,” said the department . Such matters will be overseen by the new Garda authority. The time limit for making a complaint to GSOC will be prolonged to 12 months and it will be given the right to intercept communications and carry out electronic surveillance in any criminal investigation into gardaí.