Party has recently ramped up ambitions, but much depends on Southern partners 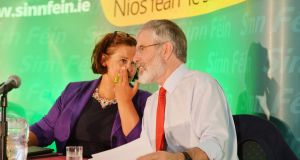 In raising the prospect earlier this year of Sinn Féin entering coalition as junior partner, Mary Lou McDonald said the party needed to have a conversation about its future prospects in government in Dublin.

The shift from the previous position that Sinn Féin would only be in government as the lead party has advanced since then.

During the summer, party leader Gerry Adams and McDonald even got into some specifics. They both ruled out Sinn Féin supporting a minority government and Adams said the party’s government priorities will be the health service, housing, Brexit and Irish unity.

Now, the conversation McDonald wanted is about to shift up another gear.

Sinn Féin TDs, MEPs, members of the Stormont Assembly and Westminster MPs gather in the City North Hotel in Gormanstown, Co Meath, today and tomorrow for the first of the party “think-ins” ahead of the new Dáil term.

Future participation in government will inevitably be a topic of conversation, as will the current political impasse in Northern Ireland.

Yet, according to party TDs, constituency-level discussions with Sinn Féin activists are more important, from a southern point of view anyway.

Sinn Féin is working on a 10-year strategy and will hold Comhairle Ceantair meetings to gauge rank and file opinion on the issue of coalition ahead of an ardfheis in November, which will decide official policy.

The meetings will also influence the party’s election policy priorities, which will follow through to any government negotiations, even if a future programme for government would have to be ratified by a special ardfheis.

“The discussion will be on who we go into government with, and on what terms,” said one TD.

TDs across numerous parties in constituencies where Solidarity-People Before Profit – which includes Paul Murphy and Richard Boyd Barrett – is strong believe support for the hard left may have peaked, which would free Sinn Féin to present itself as a party ready for government rather than a protest vote, with policies to match.

It was, after all, Murphy’s victory in the Dublin South West by election of 2014 on the back of outright opposition to water charges that pushed Sinn Féin towards a more hardline position, which in turn pulled Fianna Fáil leftwards.

Of the lower middle class vote in Sinn Féin’s sights, a party TD says: “Those type of voters are the ones who want solutions.”

“At some stage people who have an intransigent position are going to be caught out,” said another of Sinn Féin’s hard left rivals.

Housing and health are the two topics that repeatedly come up in conversation with Sinn Féin TDs, with one remarking that an opportunity to “transform the health service” would excite the party.

Irish unity will also be an issue, but perhaps not as pressing one as public statements – and rash calls for a unity poll in the wake of the Brexit referendum – would suggest. A deputy said unity could not be considered a realistic option for a decade at least.

“Demographics will eventually look after it but there is no point in dragging people into it.”

But against a Sinn Féin desire to enter government, there are no indications that either Micheál Martin or Leo Varadkar will entertain thoughts of such an alliance.

Even though many of his TDs are open to it, Martin said at the weekend that “Fianna Fáil’s established policy on Sinn Féin is that it is unfit for government in Dublin and we will oppose any and all efforts by them to get into government.”

Some in Sinn Féin believe that will change if the post-election numbers allow for a coalition but Martin must be judged on his record of not bowing to pressure to enter government with Fine Gael.

Even those in Fianna Fáil who would do a deal with Sinn Féin say two things must happen before talks can even be countenanced: Adams has to stand aside and the Northern Ireland Executive must be functioning.

On the Executive, a Sinn Féin TD said the attitude of parties in Dublin does not have a bearing on southern strategy. Rather, the TD argues, it shows voters that the party “won’t be rolled over”.

Another claims there is still a lack of understanding in Dublin about nationalist opinion in Northern Ireland. “The effect Arlene Foster has on nationalist people in the North is not understood in the South,” he said.

Yet it will be extremely difficult, if not impossible, for southern parties to deal with Sinn Féin if Stormont is still in limbo at the time of the next election.

Whether Adams leads Sinn Féin into that election will likely be settled at the November ard fheis, with different views on whether he will step aside to allow McDonald – for it will almost certainly be her – take over and complete the “leadership in transition” phase of the party’s development. Adams’s position is the main issue facing the party this political year.

No matter how much many in Sinn Féin wish it were not so, their president is the biggest barrier to the party entering coalition in Dublin.