Labour will need ‘one hell of a deal’ to enter government, says O Ríordáin 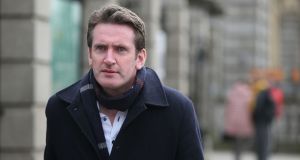 The two candidates for the Labour leadership have both said the party should participate in government formation discussions but should nevertheless stay out of any coalition.

One of the candidates, Aodhán O Ríordáin, said “it would have to be one hell of a deal for us to enter government.” He expressed doubt that it was possible.

His rival, Alan Kelly, said the party’s parliamentarians had been too quick to exclude the party from any talks in the wake of the disappointing election performance.

Both TDs were speaking at a meeting at the Clayton Hotel at Dublin Airport on Thursday night, the second of four hustings the party is holding ahead of the leadership ballot.

Separately when questions on tax were raised by members of the audience, which numbered about 120, Mr O’Ríordáin strongly criticised the Limerick-born businessman JP McManus.

“I have a difficulty with a tax exile coming into Ireland in a jet, throwing money at every GAA county in the country, and then fluting off again,” he said.

The Dublin Bay North TD expressed opposition to any cuts in tax saying it was a right-wing agenda that would affect services including health, education, housing and disability.

Mr Kelly, a TD for Tipperary, told the meeting the disability sector had been treated “absolutely horrendously” and also said the party needed to have targeted plans on health and housing.

“The area I would like the Labour Party to own is housing,” he said. He added that grandparents and parents had voted against the established parties because their children could not afford rent, or were unable to buy housing, or get access to social or affordable housing.

Earlier, Solidarity-People Before Profit TDs urged people to attend a march this Saturday in Dublin to stop what they described as “the Fine Gael/Fianna Fáil stitch-up”.

They said that any coalition between the two parties would be a “slap in the face” to people who believed they were voting for change in the general election.

The deputies said there would be protests “on the streets” against such a government, if it took office.

However, the TDs conceded that if a Fianna Fáil-Fine Gael coalition can muster a Dáil majority and take office it would be a “democratically legitimate” and “legally constituted” government.

Speaking along with student and homeless activists, TDs Paul Murphy, Bríd Smith and Mick Barry said that such a government would seek to “halt the demand for radical change”.

Mr Barry said they would “seek to build a sustained water charges-style campaign” in order to put a Fianna Fail-Fine Gael government “under pressure”.

They insisted that a minority left-wing government was still possible if Fine Gael and Fianna Fáil stepped aside from the government formation process and abstained to allow Sinn Féin leader Mary Lou McDonald to be elected Taoiseach.

Mr Murphy said that he would be part of a government that implement “far-reaching socialist measures” such as “nationalising corporate landlords”, eliminating private health insurance in the public system, and “taking the big polluters into public ownership”.

The march against any Fianna Fáil-Fine Gael government takes place in Dublin this Saturday, meeting at the Garden of Remembrance at 1pm.