Labour should not enter coalition with ‘less than 15 Dáil seats’ 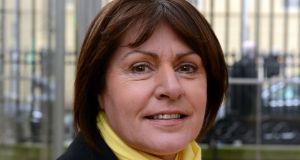 A group of Labour TDs, including a Minister of State, has said the party should not re-enter a coalition with Fine Gael after the election if it does not win 15 or more Dáil seats.

Some TDs have said the party needs “critical mass” to ensure it has influence in the next government.

Labour has polled below 10 per cent in recent months, and is facing the loss of seats. It won 37 seats at the 2011 election, with just over 19 per cent of first-preference votes.

It is campaigning to return to office with Fine Gael but some TDs said another coalition must not come at all costs. However, others said the party must go back into office.

Kerry TD Arthur Spring said that at least 20 seats would be needed for party members to ratify a programme for government at a special post-election party conference. “There is a critical mass needed,” he said.

Ann Phelan, a Carlow-Kilkenny TD who is Minister of State for Rural Economic Development, said: “You do need to have real numbers to have a real impact.” She added that less than 15 seats would make that difficult.

Longford-Westmeath TD Willie Penrose said: “You would need to be in the mid-teens up.”

Dublin Central’s Joe Costello said while he would not put a figure on the number of Dáil seats, the party needed to poll at least 10 per cent nationally. Reaching such a level would show that the electorate had “given the nod” to Labour to go back into office.

Dublin North West TD John Lyons said “it is not a done deal to go back into government”, and also suggested a threshold of 15 seats. He said a “sizeable number” of Labour TDs would be needed for the party to have a strong influence on policy.

While declining to put a figure on the level of support or number of Dáil seats needed to enter government, Galway West deputy Derek Nolan also said Labour must be in a position to influence policy. “We are not like the PDs or the Greens, who had one or two priorities. We are a national party with a national policy platform.”

Clare’s Michael McNamara questioned whether the party should go back into coalition with Fine Gael at all, and accused Labour Ministers of implementing the policies of the senior party. “When we went into government the ratio of Fine Gael to Labour TDs was two to one. I shudder to think what it would be like if it is worse.”