LÉ ‘Eithne’ crew on standby since May 1st for humanitarian mission 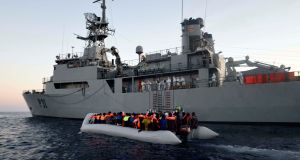 LÉ ‘Eithne’ on a rescue operation in the Mediterranean in June 2015. Photograph: Irish Defence Forces

An Irish Naval ship due to deploy to the Mediterranean to assist in the rescue of refugees, remains at its Haulbowline, Co Cork, base more than a month after Government approval was given.

The Cabinet agreed on April 11th to deploy the LÉ Eithne to the Mediterranean and the ship’s crew has been on standby since May 1st at the naval base in Haulbowline.

However, administrative procedures between the Irish side and the Italian authorities have not yet been completed.

Minister of State for Defence Paul Kehoe has insisted there is no delay in the ship going to the Mediterranean to assist in the rescue of refugee.s

Mr Kehoe said Navy vessels do not depart their bases “until the relevant diplomatic procedures are completed, which normally takes four to six weeks”.

Sinn Féin defence spokesman Aengus Ó Snodaigh described Mr Kehoe’s response as “Government nonsense” as the crew had been on standby since the beginning of May.

The Dublin South Central TD said that even if the vessel deployed today it would take three to four days to arrive. “The Italians don’t have a problem with the Irish vessel deploying. They would welcome the help with open arms because it means less pressure for them.”

The sailors have been training and are ready to deploy, he said. Mr Ó Snodaigh added the diplomatic exchanges with the Italians would involve approval for migrants rescued to be landed on Italian soil, but this “is usually done by fax/email in days and is not a major diplomatic incident”.

Mr Kehoe said in a written parliamentary reply to the Sinn Féin spokesman that, on receipt of the Government decision, the relevant communication was made to the Italian authorities. There was “ongoing contact” and he expected “in accordance with normal procedures, the exchange of diplomatic notes to be completed shortly”.

The Government first approved the deployment of the Irish Naval Service to assist in the Mediterranean humanitarian mission in May 2015, involving six separate three-month rotations by the LÉ Eithne, LÉ Niamh, LÉ Samuel Beckett, LÉ Róisín and the LÉ James Joyce.

During those rotations, the Naval Service rescued more than 15,000 migrants.