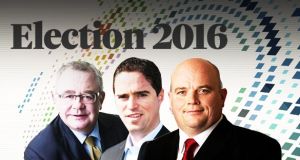 Indications show Martin Heydon Fine Gael, on 21 per cent, Fiona O’Loughlin, Fianna Fáil, on 18 per cent, her party running mate Sean Ó Fearghaíl, on 16 per cent and Labour’s Mark Wall on 13 per cent.

Fine Gael’s Mark Heydon topped the poll in Kildare South with 7,851 first preferences and was elected on the second count. But while it had been widely expected he would hold on to his seat, the double success of Fianna Fáil had not been predicted.

Though Sean O’Fearghail, the sitting TD, had been tipped to regain his seat, there had been little inclination the party could take two. And when tallies showed Mr O’Fearghail’s running mate, Fiona O’Loughlin, labelled by some a “gender quota candidate”, was ahead of him, there were more than a few feathers ruffled in the constituency.

The big loser on the day was the Labour Party; it had held a seat in the constituency since 1997, when Jack Wall was elected, and his son, Mark Wall, was considered a strong candidate.

Mr Heydon expressed his delight at being elected for a second term.

“The second time around can be tricky,” he said. He said a lot of people told him he was safe, but he wasn’t sure what was behind that. However, they ran “a particularly good campaign” and had been quietly confident. He also expressed his disappointment for the Wall family.

Ms O’Loughlin, who received 6,906 first preferences and was elected on the final count without reaching the quota, said she was delighted to be the first female TD for Kildare South. She said she was humbled and appreciative of the trust that had been placed in her.

“We are a county of achievers, not of whingers,” she said.

Mr Ó Fearghail said if anybody had suggested six weeks ago that Kildare South would return two TDs “they would have sent in the men in the white coats”.

He received 6,469 first preferences and was elected on the final count without reaching the quota. The party whip said he looked forward to working with Fianna Fáil “with at least twice its strength” in the coming Dáil.

Mr Wall, a councillor with Kildare County Council, had hopes of taking his father’s seat, but on the day, he received only 4,277 first preferences. Speaking to The Irish Times he said he was “completely disappointed”, but would continue representing his area at council level.

“It is a tough day for labour nationally, when you see people who are the life and soul of the party for so many years not getting elected, but that is the democracy we live in,” he said. He said he believed it was “down to the old story”, that the junior partner in government always suffers.

He said the party had to get back to its roots “standing up for the worker”. He also said serious questions needed to be asked about the Labour Party in Kildare.

In the first count for Kildare South, Patricia Ryan, Sinn Féin had 4,267, and Fiona McLoughlin-Healy, Fine Gael, had 3,250. Mary Kennedy, Renua candidate, received 787 votes while Suzanne McEneaney of the Green Party got 836.

Kildare South is a constituency that has had minimal change, its terms of its electoral boundaries but also in its political complexion. It is a three-seater and this relatively prosperous rural constituency is one of the most electorally conservative in the State. Since the constituency was formed in 1997, only TDs from the three traditional big parties have been elected here.

The constituency has lost six electoral divisions, with a population of just over 7,000, to the new constituency of Laois. That includes parts of west Kildare including Kildangan, Monasterevin and Churchtown.

In return, an area with a population of almost 5,000 comes in North Kildare from around the Edenderry and Naas districts.

Kildare South is predominantly rural so agriculture and the horse industry are both big issues. The development of the motorway system has meant the three big towns in the constituency - Kildare, Newbridge and Athy - have attracted a lot of Dublin commuters. Some of the towns and villages here over-expanded during the boom. The attendant problems of unfinished estates are visible.

In addition, there are other spin-off problems including negative equity and an acute shortage of housing (mostly social) in some parts of the county.

Unemployment is also a problem and the constituency has struggled to attract big employers to replace industries that have died off or moved on.

The lack of broadband connectivity is a headache here as in elsewhere, as well as the struggle of smaller villages to hold onto businesses and shops in the face of big retailers opening up branches in the larger towns.