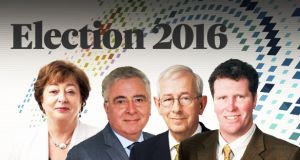 Fianna Fáil’s Frank O’Rourke and James Lawless, as well as Social Democrat’s Catherine Murphy and Fine Gael’s Bernard Durkan have been elected to the four-seat constituency of Kildare North.

It was obvious even before the boxes opened that Social Democrats Catherine Murphy would top the poll in Kildare North; it was just a question of the margin.

Those extra votes, when redistributed, did not follow any natural left lines; like a scattergun, they transferred widely and put pay to any hope of Labour supporters that outgoing TD, Emmet Stagg, might benefit more than others.

It was his transfers that finally put an end to the contest, shortly before 4.30pm on Sunday.

Fianna Fáil’s James Lawless, elected on the ninth count, had 7,461 first preferences, and stayed in second place throughout the count.

His running mate, Frank O’Rourke took a second seat for the party, though some had deemed it a risky strategy to run two candidates.

With 28 per cent of first preferences, the party did not match its high of 40 per cent in 2007, but it did manage to become the dominant force in the constituency.

The remaining seat was taken by Fine Gael’s Bernard Durkan, who had a final vote of 8,890. But his running mate, outgoing TD Anthony Lawlor, failed to get re-elected.

Speaking on Saturday evening after her election, Murphy said she was “absolutely delighted”.

“To get a quota with a small surplus is very much appreciated,” she said. “I value every single one of those votes.” She said the party would be taking stock over the weekend.

“One thing we are determined about, we don’t want more of the same,” she said. She said priorities for the party included the health service, services for people with disabilities and “getting a grip of the housing crisis”.

Bernard Durkan, who was relieved at being elected on the ninth count, said when a government is defeated in office, the combined opposition have a duty to form a government.

He said both the Labour Party and Fine Gael had been defeated and both suffered considerably, as a result of putting the country first.

“Fianna Fáil should be given an Oscar for the way they managed to come out from under the blame for what happened five years ago,” he said.

Lawless, who was elected to the Dáil for the first time at the weekend, with 7,461 first preferences, said two party seats in the constituency “surpassed all expectation”.

“It just goes to show that when an election is called, anything can happen,” he said.

Asked about the party forming a new government, he said his preference would be for an inter-party government, such as that in the 1940s, “possibly a Fianna Fáil led coalition with smaller elements,” he said.

O’Rourke, also a first-time TD, got 6341 first preferences, and said no one gave him a chance, but he fought a massive battle with the three sitting TDs and the result was “really tremendous”.

Asked about entering a coalition with Fine Gael, he said every party and politician must be mature and must look for stability.

“It’s about ensuring the right thing is done for the people,” he said.

There was no one from Labour in the count centre when Stagg, in office since 1997, was eliminated.

Some of his team had made a brief appearance early on Saturday, and left when it was obvious Stagg had no hope of taking the seat. The candidate himself never appeared.

Supporters of the party’s Mark Wall, Kildare South, remained on until early evening on Saturday, when Wall conceded defeat.

He told The Irish Times he was very shocked that Stagg had lost and that there would be no party seat in the entire county.

“There has to be serious questions asked about the Labour Party in Kildare,” he said.

Kildare North remained largely unchanged in the constituency revision with just a small portion of it around Robertstown and Timahoe moving into Kildare South. The population transfer involved is 4,698.

Before 1997, Kildare was one five-seat constituency but the expansion of the greater Dublin area saw a huge rise in population, particularly in the northern end of the county and it now has seven seats in total.

The rapid increase in population has created a range of issues. Like most other constituencies, jobs are the big issue. While there has been considerable foreign direct investment in north Kildare, it has not been enough to supply enough jobs for the burgeoning population. There is also a shortage of housing.

Transport is a real issue with the need for better public transport to provide better access to Dublin.

The constituency retains a significant rural dimension, with farming issues important, while the bloodstock industry is a vital part of the local economy.

Matt Williams: Like on my Ryanair flight, Ireland were suffocated by England

1 Shane Ross: ‘I lost a friendship with Mattie McGrath completely. He got totally personal’
2 Murder in a crowded house: The full story of the Patricia O’Connor trial
3 Areas advised to ‘stop everything’ as Storm Jorge hits Ireland
4 Coronavirus: Aer Lingus cabin crew in self-isolation after passenger’s positive test
5 Coronavirus: Myths that have gained traction
Real news has value SUBSCRIBE