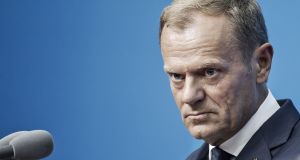 Donald Tusk, president of the European Council, who will meet Enda Kenny today amid the simmerimg row over the Commission’s ruling on Apple. Photographer: Qilai Shen/Bloomberg

A lunchtime meeting between Mr Tusk, pictured above, and Enda Kenny will be the first face-to-face encounter between the Taoiseach and one of the EU’s most senior figures since the controversial decision.

Council officials stress that the issue of state aid and taxation is a competency of the European Commission rather than European Council.

They also said the meeting was already scheduled as part of a dialogue between Mr Tusk and EU leaders on the Brexit fallout ahead of a key EU summit in Bratislava next week.

Privately there have been some expressions of concern in Brussels from member states, such as Malta and the Nordic and Baltic states, about the scale of the commission’s ruling. But the Irish Government is increasingly isolated in terms of support from larger member states.

Mr Tusk’s visit comes as a senior member of the European Commission defended the Apple ruling in an interview with The Irish Times.

Commission vice president Andrus Ansip, speaking ahead of a visit tomorrow to Dublin, where he is scheduled to meet the Taoiseach and representatives of US multinationals, said the case against Ireland was justified.

“This state aid case is based on facts,” he said. “I think we all would like to have fair competition in the European Union, ensure that all players, all companies have to be treated equally.

“The same applies to Apple. If one restaurant, for example, has to pay all the taxes according to law, and a restaurant next door does not, what kind of fair competition is that?”

This evening Mr Tusk is due to attend a meeting in Brussels of the executive presidency of the European People’s Party to discuss the upcoming Bratislava summit.

Minister for European Affairs Dara Murphy, who was appointed as one of 12 vice-presidents of the centre-right political party last autumn, said he intends to underline the importance of member states’ right to tax sovereignty during the discussion.

“All members states should be treated fairly, and the commission should not be exercising powers it was never given,” Mr Murphy said. “No Irish minister or government signed up to these powers in a treaty.”

Meanwhile, there appears to be scant support from the European Parliament for the Irish Government’s decision regarding Apple.

German MEP Markus Ferber, vice-chairman of the parliament’s economics and monetary affairs committee, said yesterday that Ms Vestager had “the full support” of the parliament across all political groups.