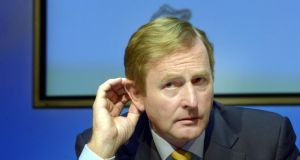 As the European Commission confirmed Ireland was one of three countries being examined about its tax arrangements, Mr Kenny insisted the state is committed to a “transparent” system.

He said the Organisation for Economic Co-operation and Development (OECD), which released its economic report on the country today, was satisfied Ireland was not a “tax haven”.

“Ireland is very happy to participate internationally, work with the OECD and the other institutions to bring about a transparent and accountable system in respect of tax,” Mr Kenny said.

“And I welcome the strong confirmation from the OECD that Ireland is not a tax haven.”

The European Commission has sent requests to Ireland, the Netherlands and Luxembourg, asking them to explain their systems of tax rulings and to give details of any deals struck with certain multinationals.

Its preliminary examination could potentially lead to a formal investigation.

In June, the Government was forced to reject claims by two US senators that Ireland was a tax haven and had handed technology giant Apple a special deal.

Ireland’s ambassador to the US, Michael Collins, wrote to senators Carl Levin and John McCain arguing the country’s tax system is transparent.

However, the lawmakers said records obtained by their committee showed Apple, which has about 4,000 employees in Ireland with most based in Cork, paid a nominal rate far below Ireland’s corporation tax rate of 12.5%.

Mr Kenny today said the country was willing to work with its European counterparts to ensure a fair system.

“I can confirm here that at the Council of Europe meeting of the leaders, there was very strong support for getting involved in the base erosion, profit shifting requirement for discussion and international involvement in setting out a transparent system of taxation here,” he said.

Opposition party Fianna Fáil urged the Government to deal with this “threat” as swiftly as possible.

European Affairs Committee member Timmy Dooley said he was surprised the Taoiseach was unaware the European Commission had been planning its probe.

“Our corporation tax rules are in accordance with OECD guidelines and robust defence of our position should be a diplomatic priority at the highest level of Government,” Mr Dooley said.

“Ireland’s corporation tax regime has been a cornerstone of our industrial policy for decades and any threat to it must be dealt with swiftly.

“Ill informed and politically motivated commentary threatens reputational damage to Ireland and the proliferation of the myth that Ireland is a tax haven.”