Keeping it real in view of TV women’s dangerous lives

Column: In television drama, if you are a single female living alone your future is going one of two ways 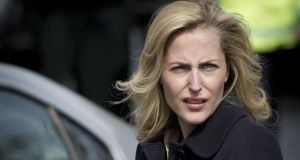 “In The Fall our fabulous female detective (Gillian Anderson) explains that the killer has washed the body of the dead woman, and even washed and dried her bed linen, before arranging her in a photogenic pose on her own bed.” Photograph: Steffan Hill

Television females lead strange lives. And not just because they wake up with all their make-up on, always have clean hair and can wear boned balcony bras which are somehow undetectable under their satin blouses.

In television drama, if you are a single female living alone your future is going one of two ways. You are either an obsessive workaholic police officer with a burgeoning drink problem – and quite possibly the heroine of whatever drama you are currently in. Or you are about to be horribly murdered – probably in your own home.

In crime drama women die like flies. Yet, in real life, things aren’t all that bad. Or rather, they are that bad, but for quite another group of people.

And yet, to look at a lot of television drama, you would think that it was quite the other way round. But then, apart from the fiction about the gender of its victims, the murder drama itself is under pressure, besieged by a falling crime rate.

In 2011 British Home Office figures for England and Wales revealed that its murder rate had peaked at 1,000 in 2007 – partly inflated by the activities of Dr Harold Shipman, who was confirmed to have killed 172.

In crime drama, however, things are exactly the reverse of reality. For a start, the single female living alone can never be an ordinary person, just getting on with her job and her life and sometimes having a good time. We haven’t had that character on screen since Laurie Metcalfe (she played Roseanne’s sister) faded from international view, and Rosie O’Donnell came out.

Are those two, who were at their best 20 or even 30 years ago, really going to be the last single white females to finish a story on primetime television unmarried but alive? (I’m leaving out Lena Dunham’s series Girls here as it is not on primetime television.) Meanwhile, back on ITV, concerns are growing for DC Rachel Bailey, of the ITV police series Scott & Bailey – an obsessive workaholic police officer whose drink problem has decidedly burgeoned, and whose life expectancy is further reduced by the fact that she keeps on having sex with men and appears to enjoy it.

If anything, the rules of television drama are even stricter for married women. A basic law is that if you are a successful, visible and highly paid woman – or even just enjoy your job – then your husband, whom you naturally adore in a childlike manner, is not going to say: “That’s a nice salary you have there, love, where will we go on holidays?”, which would be the intelligent thing to do.

He’s going to commit adultery at any given opportunity, and/or rape you (see The Good Wife and The Politician’s Husband respectively). This seems to me to be unrealistic; but then maybe I know too many happy blokes who can be bought with a holiday. Bless them.

The rules of television drama are applied with particular stringency in The Fall . Set in Belfast, this is very good and very frightening. After the first episode our own television reviewer praised it and said it made her lock her doors more securely that night . The relish of cliches demonstrated in The Fall – handsome psychopath embedded in family life; professional woman wearing a white shirt in a bar; female detective swimming alone in a pool etc – may yet have some clever pay-off that surprises us all.

However, it would want to be one hell of a pay-off to justify the violence so lovingly observed in the first two episodes. A house break-in followed by a rape followed by a murder. So far, an average night in television crime drama, if not in real life. A beautiful young woman (she’s a solicitor) tied to a bed and helpless beneath a psychopath – what a brute, eh? Yes, he certainly is a weirdo (and played by Jamie Dornan, who is a model for Dior and Calvin Klein).

In The Fall our fabulous female detective (Gillian Anderson) explains that the killer has washed the body of the dead woman, and even washed and dried her bed linen, before arranging her in a photogenic pose on her own bed.

But the thing is that all of this perverted behaviour has been faithfully observed by the television camera, and watched by the audience. The murderer’s callous posing of the corpse is recorded several times.

We live through television now. There are sights that we are better off not seeing, for both dramatic reasons as well those of psychological welfare. No matter how good the drama, sometimes it’s a good idea to remind ourselves of what is real.