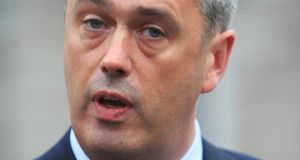 Colm Keaveney during a press briefing on the plinth of Leinster House on his joining Fianna Fáil. Photograph: Gareth Chaney/Collins

The defection of former Labour Party chairman Colm Keaveney to Fianna Fáil has led to strong divergences of views between his former party and his new one over the political significance and implications of the move.

Fianna Fáil leader Micheál Martin described the Galway East TD as a “serious politician” who would add value to the party.

But his former Labour colleagues portrayed the decision as inevitable given his expulsion from the parliamentary party after voting against the Government. Minister for Education Ruairí Quinn described his defection as “desperate”, while others pointed to his past criticism of the party he was joining.

Yesterday Mr Keaveney claimed Fianna Fáil had changed and was the only party in the Oireachtas to have learned from the mistakes of the past.

‘Renewal’
“I am delighted to have witnessed a renewal in Fianna Fáil at the grassroots level to suggest my value system is apparent in Fianna Fáil,” he said.

“I was elected in a democratic revolution in 2011. I am delighted that Fianna Fáil has given me an opportunity to represent those values,” he said.

“It has become increasingly clear to me that the only organisation in Irish politics that seems genuinely interested in learning from the lessons of the past and putting fairness at the heart of policy making is Fianna Fáil.”

Mr Martin said Mr Keaveney will be the party’s spokesman on mental health and special needs and will remain in Galway East, a constituency that was radically redrawn and reduced to three seats from four in the latest boundary changes. Fianna Fáil already has one sitting TD in Galway East: Leas Cheann Comhairle Micheál Kitt.

The 42-year-old TD was expelled from Labour’s parliamentary party after voting against the social welfare aspects of the budget last December. He continued as chairman of the party for a period but later resigned and sat on the Independent benches. Even before his expulsion Keaveney had clashed with the leadership and with some members of his parliamentary party.

The Fianna Fáil parliamentary party yesterday unanimously accepted his application to join the party and he was presented as its 20th TD on the plinth of Leinster House by Mr Martin early yesterday afternoon. Mr Martin said he was struck by Mr Keaveney’s commitment to fairness and his determination to make his time in politics count.

“He is someone who is deeply motivated by the impact politics can have on individuals and communities and wants to be part of an organisation that is committed to a fairer way to recovery,” Mr Martin said.

The development has heightened speculation that there may be other parliamentarians who may consider joining Fianna Fáil. Some Labour Senators have been mentioned, as has Meath West Sinn Féin TD Peadar Tóibín, who is currently outside his parliamentary party after defying its whip on the abortion issue.

It is understood that some members of Fianna Fáil have had conversations with Mr Tóibín in recent weeks but he still sees his future with Sinn Féin. He will be meeting party officials in January, at which time resolution will be sought on any outstanding issues between him and the party.