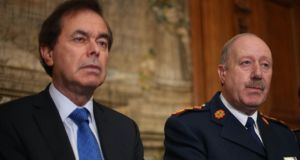 Alan Shatter (left, with former Garda commissioner Martin Callinan) stepped down this week as a result of the findings in the Guerin report, published today. Photograph: Niall Carson/PA Wire

Taoiseach Enda Kenny and Minister for Justice Frances Fitzgerald have said a “root and branch analysis” of the Irish justice system will be carried out as a result of the findings of an investigation by barrister Sean Guerin into allegations of corruption and malpractice in the force published today.

In his 300-page report on a dossier of claims handed in by garda whistleblower Sgt Maurice McCabe, Mr Guerin concludes that An Garda Síochána and former minister for justice Alan Shatter failed in their duties to properly investigate matters raised by Sgt McCabe.

It says a comprehensive commission of investigation is “desirable in the public interest” to ensure “continuing confidence in the institution of An Garda Síochána and the criminal justice system”.

Responding to the report this evening, Taoiseach Enda Kenny said a root and branch analysis of the policy and practice of the administration of justice in Ireland is now needed. Mr Kenny said the Dail would debate the content of the Guerin report next week and he would welcome the contributions of all members.

“This is not just about politics, it is about getting it right for the people of our country-for the citizens, for the next generation, for everybody to have integrity, belief and faith in an garda siochana, in the accountability, in the transparency in the way it is run,” he told reporters in Gort, Co Galway.

The newly appointed Minister for Justice Frances Fitzgerald said its findings reaffirm that “we must now enter a new era of policing in this country and that organisational reform and cultural change is essential.”

She said it raises “fundamental questions about the treatment and response to victims of crime which must be addressed as a matter of priority. The content and the findings are extremely grave.”

Interim Garda commissioner Noirín O’Sullivan said she was studying the report’s findings closely in conjunction with senior management “ to identify immediate actions that can be taken as part of our process of change that is currently underway”.

Sgt Maurice McCabe tonight welcomed the findings of the Guerin report and said it had vindicated him.

“It is a good day after six years of fighting the system. Now I hope my family and I can move on.”

Sgt McCabe expressed his thanks to Fianna Fail leader Michael Martin for taking on his case and forwarding his file outlining his concerns over garda conduct to Taoiseach Enda Kenny.

Sgt also mentioned that despite the findings of the Guerin report “I am still restricted from accessing Pulse”. He added that there had been no contact from anyone in senior Garda management after the report was published.

Mr Guerin found that the “overall impression given by the internal Garda investigative process was that complaints or matters of concern were put through a process of filtration or distillation so that, by the end of the process, any matter of concern had been removed as a form of impurity, and only what was good was found to remain.”

Mr Guerin said the terms of reference for such a commission should include “definite matters of urgent public importance” such as:

- The Garda investigation into a public order incident and possible sex assault on a bus at Kingscourt, Co Cavan in February 2007

- The investigation of an assault at the Lakeside Manor Hotel on April 14th, 2007.

Mr Guerin said it was beyond the scope of the review to make any determination on the complaints made by Sgt McCabe but that the documentation he examined “gives cause to share the concern expressed in them” and that there was “cause for concern as to the adequacy of the investigations that have taken place into these complaints”.

He said the “personal and professional consequences” experience of Sgt McCabe since making his complaints also gave cause for concern.

He said no complex organisation can “expect to succeed in its task if it cannot find the means of heeding the voice of a member whose immediate supervisors hold him in the high regard in which Sgt McCabe was held”.

“Ultimately, An Garda Síochána does not seem to have been able to do that. Nor does the Minister for Justice and Equality, despite having an independent supervisory and investigative function with statutory powers”.

He said the same “appears to be true of GSOC” but that his review was hampered in making any assessment as GSOC did not make documents available.

“A critical voice is in danger of being heard as a contrary voice” in An Garda Siochana , he concludes.

The report has been redacted in parts for legal reasons on the advice of the Attorney General.

“These reasons include the need to protect the personal information of individuals, information about children, the identities of suspects and the privacy of certain persons mentioned,” the Government press office said.

In a letter to the Department of the Taoiseach, Mr Guerin said parties who provided documentation had co-operated fully with the review but he said it was unfortunate that the Garda Síochána Ombudsman Commission had not provided any material.

Mr Guerin noted that GSOC had indicated it was unwilling to provide documentation without having relevant safeguards in place.

He said he had to complete the report without this material which was “somewhat unsatisfactory” but “did not impede the review”.

Mr Guerin recommends that an An Garda Síochána review the procedures for the taking of a statement amounting to the withdrawal of a complaint of criminal wrongdoing.

He said “such a statement should not be taken and should not be recorded as the withdrawal of a complaint, merely because the complainant has been told that there was insufficient evidence to prosecute”.

He says An Garda Síochána should review the effectiveness of the Pulse computer system as a means for recording and supervising compliance with conditions of bail.