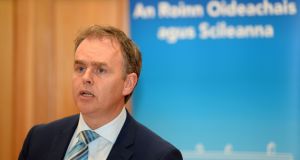 Joe McHugh: ‘I’d be fluent at this stage. I do all my business through Irish and do live interviews in Irish.’ Photograph: Dara Mac Dónaill

Minister of State for the Gaeltacht Joe McHugh goes back to school today. Previously a summer school student in Glencolmcille, Co Donegal, with language organisation Oideas Gael, this year his role is reversed.

For a week the Donegal Fine Gael TD will be teaching Irish to adults, many of whom have barely remembered school Irish.

And he will get the opportunity to show off his hard-won fluency. He stresses he is fluent, rejecting suggestions he is merely “fairly fluent”.

“I’d be fluent at this stage. I do all my business through Irish and do live interviews in Irish,” he says.

That is a far cry from the widespread criticism he and then taoiseach Enda Kenny received when he was appointed in 2014 as Minister for the Gaeltacht, even though he only had the cúpla focal.

It was a tough time. “I was in a pretty bad place initially for the first 48 hours.

“You start to question your own ability and competence... whether I could do the job especially with such criticisms coming at me.”

He got some inspirational support. Rosemary Bonner, a retired primary school principal from Ballybofey, Co Donegal, sent him all her teaching notes, grammar books and tips for learning.

Inspiration came too from John Wilson in Australia who told him he had started learning Irish the previous year, was doing really well, and he was 80 years old.

This proved to the Minister that it was a myth that “you’re too old to learn new tricks or some people aren’t good at languages”.

“Once you make that decision to learn Irish you learn very quickly that Irish is all around us via people texting you in Irish, to you driving along the road and watching all the bilingual signage.”

He said: “A few things worked for me. You have your grammar book, you have fóclóir.ie and tearma.ie on your iPhone.”

But the big changeover for him was to start thinking in Irish, whether reflecting on the day or out jogging. “That was a massive help to me that I was using that time to turn things around in my head, to think things through as Gaeilge rather than as Béarla.”

When he was appointed Minister, the first Irish word he learned was deontas or grant, suggesting to outsiders a policy approach that offers a crutch of subsidy keeping the language on life support.

But the Minister rejects this view. The strategy is at a “very crucial moment”. A lot of language planning has taken place and “we’re now ready to implement the language plan”, employing people “in the individual Gaeltacht areas to roll out these plans – basically promoting the language and trying to get more people to speak it”.

4 Q&A: Which Covid-19 restrictions are being lifted from today?